Water Valley resident’s quilts to be exhibited in South Carolina 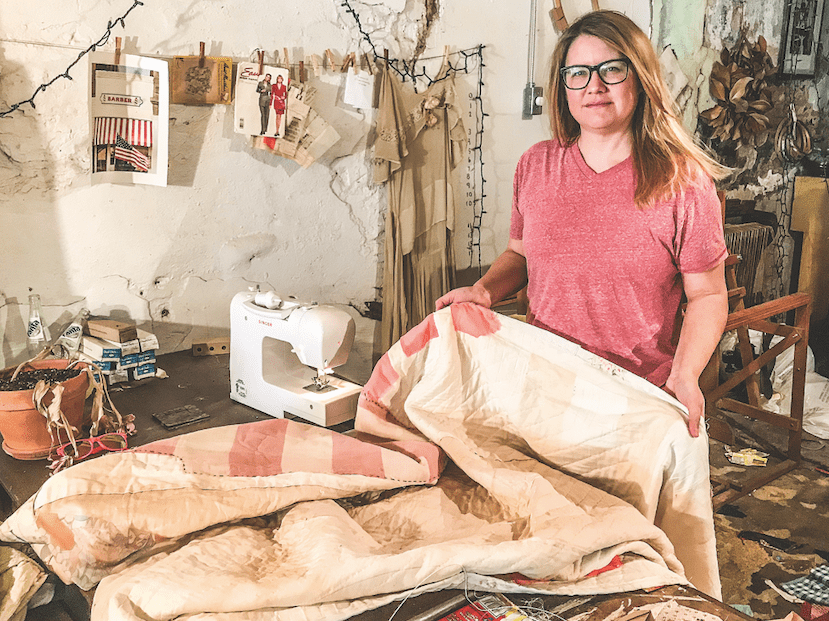 Coulter Fussell works on a quilt at her store in Water Valley, Miss. Fussell will have her quilts featured in an exhibit at the Halsey Institute of Contemporary Art at the College of Charleston beginning January 17. (Jake Thompson, Oxford Eagle)

Coulter Fussell is a painter first, but adding quilting to her skillset has paid off as she prepares to exhibit her work in South Carolina next week.

The Halsey Institute of Contemporary Art at the College of Charleston is presenting an exhibition of Fussell’s work, titled “The Raw Materials of Escape.” The exhibit begins on Jan. 17 and runs through Feb. 29.

Making quilts was not something Fussell said she was interested in as child, but she learned the art by watching her mother, as most all girls did in the South in generations past.

“My mom is a like a prolific, really good quilter and has been my entire life,” Fussell said. “When I was in my late teenage years, college, she and I made some quilts together. That was the point in which I really figured out the method in doing it.”

After being a painter “for years,” Fussell then returned to quilt making after the birth of her first son, when she made him a quilt 12 years ago. Since then, all Fussell has done is make quilts and sew.

When not waiting tables at Ajax Diner on Oxford’s Downtown Square, Fussell can be found working in her shop, yaloRUN Textiles, on Water Valley’s Main Street. Most of her materials for the quilts come from donations that people bring in, as well as a full supply of fabric.

Next week’s exhibit came to be when Fussell was contacted by the institute via email. She had previously won some awards for her artwork, which is how Fussell believes they became aware of her and her quilts.

This will be Fussell’s first gallery exhibition that features her works exclusively. There is not a theme to it, beyond the raw materials she uses to convey poverty, lacking and need that she tries to instill into her quilts.

“Fussell’s work challenges traditional quilting practice in that she creates pieces that are composed paintings,” said Katie Hirsch, curator and director of strategic partnerships at the Halsey Institute of Contemporary Art. “The interplay between light and dark in her work makes references to foreground and background while retaining the wholeness traditionally associated with a quilt.”

The quilts are solely for show during the exhibit, but once it concludes, anyone who is interested in pieces can speak with Fussell about potentially purchasing a quilt. While already known somewhat nationally for her work, Fussell said she hopes the exhibit gets her name out to the regional quilting community.