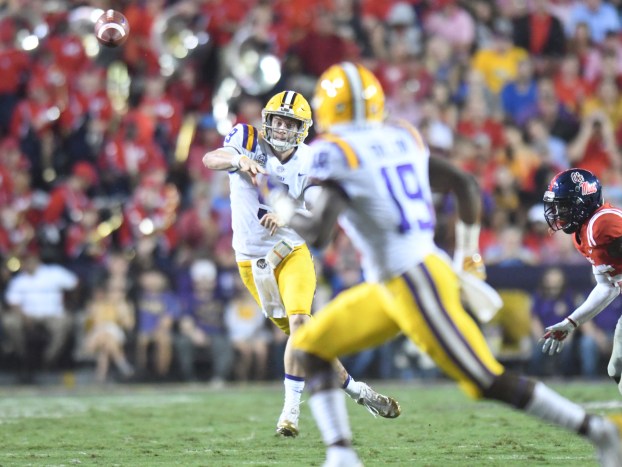 In wake of Monday night’s national championship victory, looking back at the journey LSU took to the Superdome, many have asked a simple question that gets asked often after a run like the one 2019 Tigers went on: Is this the greatest college football team of all time?

However, the answer is probably no. It’s hard enough to be able to compare this team, across relatively modern eras to 2001 Miami or 1995 Nebraska or 2005 Texas. It’s straight up impossible to 1979 Alabama or 1956 Oklahoma.

However, there are ways to look at this LSU team and take away something major overarching the history of the college football landscape. What Joe Burrow and LSU put together over the last 15 games might have been the best offense in the history of the sport.

Entering 2019, Burrow was 40-1 to win the Heisman Trophy, according to Vegas oddsmakers. Adrian Martinez, Sam Elhinger and Shea Patterson had considerably better odds. Not only did he run away with the sport’s most prestigious award; he did so in record-breaking fashion.

Most impressively, Burrow became the first quarterback to ever crest 200 in passing efficiency, finishing with a 202 rating. Others have recently broken that record in the past five years – Tua Tagovailoa, Kyler Murray and Baker Mayfield all did it since 2016 – but none of those guys crested 43 touchdowns. Burrow threw 60.

As a team, LSU scored a touchdown on over 48 percent of its drives this season, the highest mark since SportSource Analytics has been tracking it. Their 86 touchdowns in the regular season eclipses every national champion in recent decades. The 2018 Clemson team that won a national championship scored just 64 in the regular season. The only teams of late that even come close to the 86 number are 2013 Florida State (84) and 2014 Ohio State (83).

Those numbers aren’t even counting the six touchdowns LSU scored on Clemson in the national championship game, or the nine they scored on Oklahoma in the semifinal game, a game they let up in the second half after scoring seven first half touchdowns.

Ed Orgeron deserves a lot of credit. Sure, he’s not calling offensive plays or even involved in the offensive game-planning much, but Orgeron has clearly learned and grown a lot since his days at Ole Miss.

Ole Miss Orgeron never would have completely overhauled the offense, giving tremendous flexibility and empowerment to Steve Ensminger and a 30-year-old passing game coordinator in Joe Brady. Simply the hire of Brady, pulling him away from Sean Payton and the Saints to take one of the most conservative offenses a few years back into one of the most progressive, pass-first offenses in modern history – and it worked.

This LSU offense changed the way people think about the sport. A little-recruited high school quarterback in Burrow that couldn’t even win an Ohio State backup job before transferring to LSU will be cemented as having one of, likely the best, college seasons ever by a quarterback. His NFL career is far from a known quantity, but for now, he’s one of the best college quarterbacks ever, pioneering what may be the greatest offense in the history of the sport.

Oxford’s Kylan Blackmon and Lafayette’s Azariah Buford have been selected to represent the state of Mississippi in the 2020 Mississippi-Alabama... read more