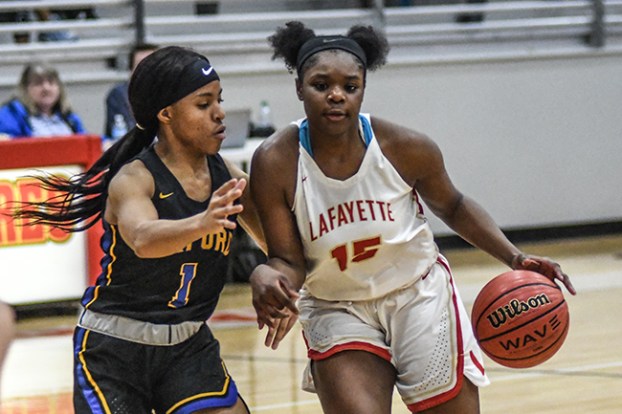 Oxford girls slow down Lafayette, but Commodores pull away for ninth straight

Oxford girls slow down Lafayette, but Commodores able to pull away for ninth straight

A season ago, the Oxford vs. Lafayette girls basketball games were hardly competitive. This season’s set of games told a different story.

Lafayette beat Oxford 42-33 on Tuesday night, the Commodores’ ninth straight win over their crosstown rival. However, the Chargers are improving. A year ago, they lost to Lafayette by a two-game average of 18.5. This season, they lost both games by exactly nine points in each game.

“We want to get the win, especially since we had those chances in the fourth quarter. In their gym, that’s a tough environment, but I was proud of our girls. The effort plays and the winning plays were there, we just weren’t able to get a basket in crunch time,” said Oxford coach Cliff Ormon. “It’s not a moral victory. But we hope that we can take some things that we did well tonight going into the region play these next few games.

The Commodores jumped out to a 10-2 lead in this one, but led just 10-7 after one quarter of play. Lafayette is a smaller, guard-oriented team that struggled at times with the size of Oxford. In the first half alone, they committed four charging penalties. Oxford was able to tie the game at 15 with 3:35 to play in the half, but they would never lead.

“Credit to coach Orman and Oxford,” said Lafayette coach Shayne Linzy. “They knew what we were going to do and knew we were going to attack. They did a great job of putting their girls in a position to take those charges. They got us out of what we like to do.”

Lafayette, who has lost just one game this season to a team from Mississippi, struggled to score but was still resilient enough to find ways to win the game. Oxford had a few runs in them, cutting the game to 28-31 with 3:35 to play and getting the Commodore lead to just three with a minute and a half to play.

Molly Jones, hitting four threes, led Lafayette in scoring with 15. Those 15 points were much needed in a night where the team’s leading scorer, Kimaya Dixon, had just four. Oxford freshman Audria Houston scored 19.

However, the Commodores have just been in that position so many times. They made just enough plays and hit just enough free throws, eventually pulling away for a 42-33 win.

Oxford boys roll in second crosstown meeting for win No. 15

Oxford needed to play their starters for just over a half of play, beating Lafayette 69-35 for their 15th win of the season. Oxford has now won 11 straight crosstown rivalry games over Lafayette.

The Chargers started, a little slowly, but put together a 24-point second quarter on the Commodores to take a 41-15 lead at half. Kylan Blackmon, who’s averaging over 25 points per game on the season, hit four three-pointers in the second quarter alone. He’d finish with 21 points.

A game like this serves as an opportunity to get some minutes to some players that haven’t seen much varsity time for Oxford. Sophomore Omari Frierson got himself six fourth-quarter points in the blowout.

For Oxford, the win takes them to 15-6 on the season. The loss drops a young and struggling Lafayette team to 2-14. Junior Brendan Toles had his season high with 14 points in the loss.

Shorthanded Rebels dominated by Florida on the road

Ole Miss went to Gainesville down a considerable number of bodies, but they fought about as well as one could... read more