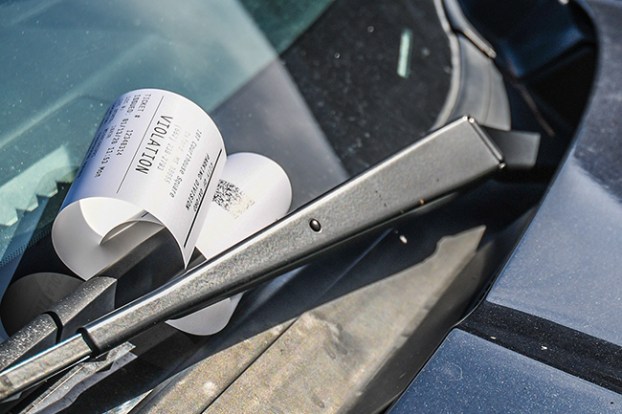 An overtime ticket is placed on a car on the Square in Oxford, Miss. on Monday, January 13, 2020. The Downtown Parking Commission is considering raising the price of an overtime parking ticket. (Bruce Newman, Oxford Eagle)

In an effort to simplify the process and to enforce compliance, the Downtown Parking Commission is considering raising the price of an overtime parking ticket.

Currently, the fine for the first and second violation within a 12-month period is $10 apiece; then, the price goes up to $25 for a third violation and $50 for a fourth violation and all subsequent violations.

On Saturdays when there is an Ole Miss home football game, the first violation is $50, then increases to $75 for a second violation and maxes out at $100 for a third or subsequent violation.

According to the City of Oxford’s parking director, Matt Davis, 85 percent of tickets since fiscal year 2014-15 have been first-time violations.

The commission is considering a change due to the current collection method for those tickets and the operation of the ticket system.

“We’ve had a lot of people call the office and wonder why (they) got a certain ticket,” Davis said. “‘Why would I get (a $25 ticket)? I paid my tickets.’ We understand why we have these tickets at these certain levels, to decrease people from getting more tickets. But then we get into compliance, where people are confused with what we’re doing, it kind of deters them from actually paying it.”

Since the new parking ordinance went into effect on Oct. 7, there were 1,874 tickets issued in the Downtown area, with an average of 625 a month. Of those, only 1,110 were paid.

Davis asked the Kimley-Horn group to conduct case studies in other towns with different types of ticketing and fine structures. Studies were done in Auburn, Ala., Columbia, S.C., Athens, Ga. and Tupelo.

The studies revealed that Auburn has a similar fine structure to Oxford’s, wherein the fine increases with each violation, capping at $50 for a third violation. Davis noted Kimley-Horn did not specify if that is over a 12-month period or not. Columbia’s structure is similar, but they issue second and third violations for the same meter. Athens does not have a structure, issuing a one-time $25 fine for overtime parking and a $20 fine for an expired meter.

Commissioner Tom Sharpe noted that he spoke with someone who was a supervisor of the municipal clerks of Tupelo and was told their structure has “not been effective,” and when the ticket fine increases to $50 that it is “just too much” and violators ignore it.

The recommendation presented during the commission’s monthly meeting on Jan. 10 was that Oxford implement several changes to the fine and violation structure. Davis recommended one ticket price for overtime violations at parking meters, and then if the ticket goes unpaid over a period of time, it should increase.

“We’re just trying to simplify what we have,” Davis said.

A fine of $15 for each ticket, regardless of how many tickets someone has, was discussed with that ticket increasing to $25 if not paid within a month of it being issued. A vote was not made and the issue was tabled to allow Davis time to determine the best course to take, whether an ordinance change must be made and to evaluate other variables.

One decision that was made during the meeting was the removal of the three-hour parking limit during Ole Miss home football game days.

Officers with the Oxford Police Department responded to Marquis Chevron, located at 2100 South Lamar Blvd., for a report of... read more