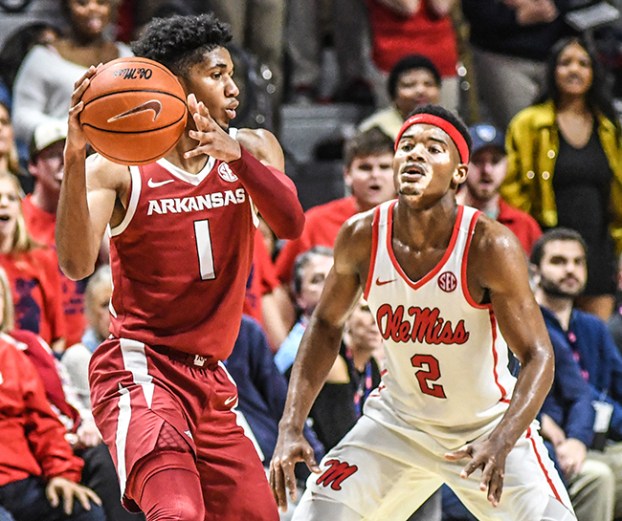 Struggling Rebels to play smaller as they travel to Florida

The Ole Miss men’s basketball team has struggled playing multiple forwards on the court at the same time.

However, the team is also missing two key role player guards, leaving them with a short bench.

So, what’s the answer? For head coach Kermit Davis, the guards the team has are simply going to have to play more minutes.

“We were playing too big,” Davis said following Saturday’s Arkansas loss. “When we tried to play our three bigs together, we just couldn’t do it. It’s just hard to play Blake (Hinson) and KJ Buffen together right now.”

The single biggest issue identified when playing Hinson and Buffen together, plus Khadim Sy at the center spot, is simple defensive lapses. A year ago, Buffen and Hinson rarely played together – Davis would just use them to spell each other, having one on the floor at all times. This year, he’s tried playing them together, but to this point it simply hasn’t worked.

That inability to go big puts even more pressure on the Rebel guards, of which only four are healthy right now. With only four healthy guards and Davis’ desire to play three at a time, it means the healthy guys are simply going to have to play a staggering number of minutes moving forward.

Over the past three games, Devontae Shuler played 38.3 minutes per game. Breein Tyree is averaging 34.6 over that same span. It’s admittedly difficult for them, but they may not have a choice.

“It’s been really tough. I just have to play through it,” said Shuler, referring to the minutes him and Tyree are expect to play. “There’s not many people that we have ready to come in off the bench. So (Tyree and I) are just taking responsibility for the minutes that we’re playing and just keep going.”

Davis admitted earlier last week that Luis Rodriguez, who played 22.4 minutes per game when healthy, may end up medical redshirting due to a foot injury. Bryce Williams, a junior JUCO transfer playing his first year at Ole Miss, hasn’t played since Dec. 29 while nursing a groin injury.

Those two injuries leaves redshirt freshman Franco Miller Jr. and true freshman Austin Crowley as the only other active guards on the roster behind Shuler and Tyree. Saturday against Arkansas, Miller played 24 minutes in which he committed four fouls, turned the ball over three times and failed to record a single point, rebound or assist.

And for a Rebels team with literally the toughest remaining schedule in the Southeastern Conference, that’s going to be a problem.

“Arkansas was a quadrant one win that got by us. But you know what? There’s two more coming up right here,” Davis said. “It’s like a bunch of mini-seasons within the year. … Last year, we played the eighth toughest schedule in the SEC and this year it’s number one, just by luck of the draw. It’s going to be taxing. January is a tough, tough month. But, on the other hand, it’s some great opportunities for our team.”

On Tuesday, the Rebels (9-6, 0-2 SEC) travel to a Florida (10-5, 2-1 SEC) team that opened the season ranked No. 6 in the AP Poll. The Gators have had a much more up-and-down season than many anticipated. However, this is still a Florida team that is 5-1 at home, scoring over 100 points in each of their last two home games.

The Florida game will be today at 6 p.m., televised on ESPN2.

From the second meeting of a crosstown basketball rivalry to the closing stretch of the soccer regular season, games in... read more