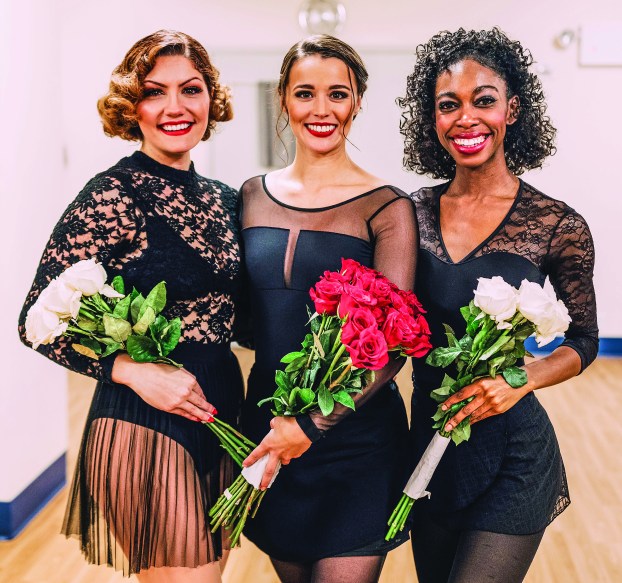 Kate Gulotta, from left, Emma Pittman, and Khalifa White auditioned for the part of Roxie in Chicago The Musical. (Emilio Madrid)

When Emma Pittman was moving into her New York City apartment, everything seemingly fell into place all at the same time.

Pittman’s mother was in town helping her settle into her new apartment as Pittman began her new life when she received a phone call that would assuredly jump-start that life. Pittman was informed she will be starring in the Broadway classic “Chicago” as its leading lady, Roxie Hart.

They were informed a day before the rest of the country found out that Pittman had beaten out two other girls who were vying for the iconic role.

“It means everything to me,” Pittman said. “It’s like a dream come true. I’ve always dreamed of just being a part of the Broadway community in any aspect, in any way. To know that all the work, not only I put in, but teachers and mentors who have believed in me and pushed me to grow and to learn. All that work that we put in, it got me here and now I’m excited to do more work and meet more people.”

Earning her first major Broadway role was the result of going through an audition process that is unorthodox compared to the traditional way actors audition for parts. Pittman took part in “The Search For Roxie,” a video series that chronicled her journey, along with actresses Khalifa White and Kate Gulotta, through the audition process.

Before Pittman found herself in New York and part of the audition competition, she first had to submit a video audition to be considered for the final three. A nationwide search was called for women to learn a song, a monologue and a dance from “Chicago” and put it in a video audition format and upload it to their website.

From there, casting directors and actresses who have played Roxie on Broadway previously, examined all the submissions and selected a Top 10. Pittman made that cut and then those 10 women took part in a voting process where they had to ask all their friends and family to vote for them make the top three finalists.

Pittman made the final three and was flown to New York to take part in what she called a “Roxie boot camp” where they rehearsed the same monologue, song and dance from the initial audition tape with Broadway professionals. Throughout the process a documentary series was filmed with five different episodes released throughout the boot camp.

The three hopefuls learned more about Roxie from “Chicago” alums who have previously performed the role and helped create the choreography. Choreographer Ann Reinking, Bianca Marroquín and Bebe Neuwirth, also known from her role as Lilith in the hit sitcoms “Cheers” and “Frasier,” took part in the audition process and eventually selected Pittman as the next Roxie Hart.

“It was incredibly informative, it was incredibly assuring and the Broadway community is just full of love and encouragement,” Pittman said. “Never were they trying to get either one of us to be anyone other than ourselves. They just wanted us to do our very best Roxie, which was driven in who we are and where we’ve come from. That’s what I thought was really beautiful. They gave wonderful notes and catered to us individually in our own ways.”

Prior to preparing for her Broadway debut, Pittman was a star in the Oxford High School theatre department. Moving to Oxford in the ninth grade, she took part in productions of “Suds,” “Wizard of Oz,” “Scream,” “Into the Woods” and “Boeing-Boeing.”

Theatre teacher John Davenport said he could see the potential in Pittman and was not surprised to see her already reaching Broadway six years removed from high school.

“For years, I have been saying it was just a matter of time before we saw Emma on Broadway,” Davenport said. “She has just the right passion and drive for it. I am thrilled for Emma and I am equally anxious to see where this opportunity will lead her next.”

When people can see Pittman make her Broadway debut is unknown at this time, though she is expected to take the stage as Roxie Hart sometime in 2020.

Watch the final video of the series below where Pittman is officially selected as the next Roxie:

The fate of the Confederate statue on the University of Mississippi’s campus is on hold. During their monthly meeting, the... read more