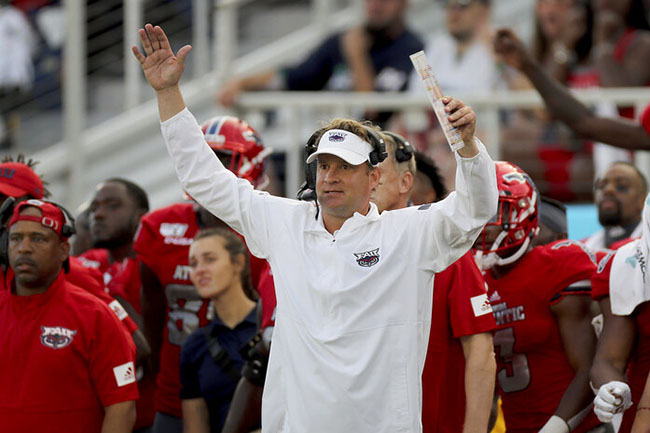 Rob Ash got an unexpected text message back in December.

Championship Analytics, the company he’s been serving with as the Director of Coaching Development since 2017, had been back in the news because of throwaway line in an Ole Miss press conference – Lane Kiffin’s introductory press conference.

“’Get ready to rip me.’ That’s how Kiffin ended that press conference, right?” Ash said.

The days following Lane Kiffin’s hiring at Ole Miss sent shockwaves throughout the college football landscape. Rebels fans have a right to be excited about their new head man and how he’s brought the Ole Miss program back into the national conversation.

What many Rebels don’t know is, Lane Kiffin about to introduce Ole Miss fans to a whole different way of thinking about the game of football. Kiffin will be using math and spreadsheets to guide his in-game decision making, and that might just mean going for it on 4th down from inside his own territory.

“The old-school way (of coaching), from an analytics standpoint, is extremely conservative,” Kiffin said. “There are so many more times you should be going for it and not kicking long field goals, and people just punt or they go kick and they don’t realize there’s only a six-percent chance to make that field goal. … A lot of coaches are afraid of the press conference afterward, and so they do the conservative, easy thing where you guys don’t rip him. Get ready to rip me.”

Integration of mathematics and analytics in sports is far from new; it’s just taken a little longer to get to football. The biggest single spot fans will see a noticeable change with Kiffin and Ole Miss moving forward will be how he approaches 4th downs. And a big part of how Kiffin approaches 4th down decision making is going to be exported. That’s where Rob Ash and Championship Analytics (CAI) comes in.

CAI started in 2012, but really didn’t get going until 2014. The first college to buy into the products they were offering was Troy University. By 2014, they had three schools, including Montana State, where Ash was the head coach at the time. He’s not a math or economics major from an Ivy League school – Ash is a 68-year-old, ex-Cornell quarterback. Not the Ivy Cornell University in New York; in fact, Cornell College in Iowa. Ash isn’t the typical image of an analytics whiz. He’s a chiseled football guy with 38 years of head coaching experience that helps him sell skeptics on the usefulness of these analytics.

The flagship product offered by CAI, the one that they sell now to over half of FBS universities, is what they call The CAI Game Book. Boiled down to a very baseline level, the game book is a set of 4th down charts to help coaches determine when they should go for it, punt or kick a field goal during different in-game situations. The biggest factors that influence the decision making are the down-and-distance, spot on the field, time remaining in the game and score differential. However, each game book is specifically tailored for each school and each game, including outside factors such as the evaluation of a team’s kickers, weather conditions, where the game is being played, and the point spread of the game.

A sample CAI Game Book recommendation chart for a late game situation in which the offense is trailing. (Courtesy of Championship Analytics)

One of the big differences between CAI and other analytics providers is the in-game practicality. It’s not forcing coaching staffs to dig through piles of data. It’s simply providing a recommendation of what to do in specific situations.

“This is real time. Our charts will tell the coach, ‘Okay, it’s 4th and 4 from the 50 yard-line in the second quarter and you’re down 14-7. You should go for it,” Ash said. “Kiffin is one of the guys that’s used it beautifully. At FAU, he was terrific. First of all, he believes in it and he trusts it. A lot of coaches will override the recommendations. When it’s 4th and 1 from your own 34-yard-line, a lot of times our charts will tell you to go for it. A lot of coaches will say, ‘No way,’ and punt. When Lane said ‘Get ready to rip me,’ that’s why. He’s going to follow the recommendation.”

CAI is the company with which Kiffin is familiar. In the past, Ole Miss had no relationship with CAI. The Rebels will be moving forward, as CAI begins helping run Ole Miss’s game planning from a strategy side.

It’s not just private companies hiring math nerds from Northwestern making these decisions and telling coaches what to do – there’s actual research done at highly credible universities that have dived into the numbers as well.

Derrick R. Yam of Brown University, in a 2018 article published in the Journal of Sports Analytics, found that better fourth-down decision-making strategies would yield roughly an extra 0.4 wins per team over the course of a 16-game NFL regular season. That may not sound like much, but extrapolating to data from 2004-16, he found that averages to 4.7 wins per team. For the Cleveland Browns, the worst team in decision-making over that stretch, better fourth down decision-making would have resulted in an extra 6.7 wins over that 13-year time frame.

So all this presents the obvious question: When should teams go for it?

In a way, the decision-making process is sort of like sitting at a blackjack table. Analytically speaking, a team should go for it on fourth down if the numbers suggest that your odds of converting and sustaining a drive would result in a higher amount of average points on average than if you kick a field goal or punt.

In 2019, FBS programs converted on 76.7 percent of field goals. Teams attempted 2,762 4th down conversions, hitting on a rate of 53.2 percent. Lane Kiffin’s FAU team converted on 59.1 percent of such 4th down attempts a year ago. Those conversion numbers include late-game situations where a team may have to attempt a 4th and 13, so the numbers on voluntary attempts are higher. Very basically, if you can sustain a drive at a 60-percent rate, increasing your odds of scoring a touchdown, that’s often considerably more valuable than attempting to kick a field goal. 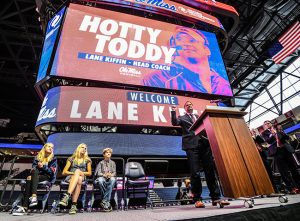 “It’s not about us at CAI. It’s about what it does for (Kiffin) and his team,” Ash explained. “In certain situations, going for it on fourth down gives them a better chance to sustain a drive and score more points. That’s why he does it: not to get in our good graces, but to keep a drive going. It’s just playing the odds, playing the percentages to keep a drive alive.”

Yet, with all the data and research suggesting teams and coaches should be more aggressive, many are hesitant. Kiffin says ‘get ready to rip me,’ but some just don’t buy into the theory. Others are worried about their job security.

A journal article by Mark F. Owens and Michael A. Roach of Penn State University, published in the Journal of Journal of Economic Behavior & Organization in 2018, found that while coaches know kicking may not maximize their chance of winning, it could actually maximize their chances of keeping a job. Therefore, the paper finds that in college football, coaches became more conservative on fourth downs as they became more likely to be fired.

It was actually at Alabama that Kiffin got introduced to CAI and this sort of analytical decision making. Mike Locksley, now the head coach at the University of Maryland, had worked with CAI when he was an assistant at Maryland from 2012-2015. In 2016, Locksley joined the Alabama staff as an offensive analyst. Kiffin was the offensive coordinator at the time. The more he heard from Locksley, the more he was taken by the strategies. When Kiffin left Alabama in 2017 to take over the Florida Atlantic job, he immediately wanted the Owls to buy into that approach, hiring CAI to essentially run the FAU analytics department.

“They change the way you think,” Kiffin said. “You get a weekly report of things around the country. Here are all these situations and here’s how people handle them. When you dive into it, you spend hours studying it. It doesn’t tell you how to coach the way most coaches coach.” 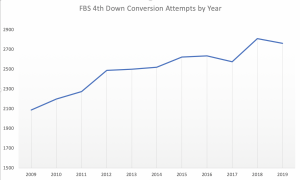 Number of 4th downs attempted by all FBS teams per year over the past decade of play (Graphic by Nathanael Gabler using data from cfbstats.com)

In 2017, the Super Bowl winning Philadelphia Eagles went for it on more 4th downs than any team in the decade, at the time. Head coach Doug Peterson had an extra assistant in his headset during games, just to inform him of 4th down decisions. What’s happened since? The 2019 Baltimore Ravens, who went 14-2 in the regular season, converted on over 70 percent of their fourth-down attempts, never kicked a field goal from inside the 20 yard-line and kicked just eight times from inside the 30. Keep in mind that the Ravens have Justin Tucker, who is statistically the best kicker of all time.

Just a day after Kiffin’s introductory press conference, when he mentioned CAI by name, Ash got a phone call from a different team in the SEC. He wouldn’t say the name of the team, but they had heard of the company from watching Kiffin’s Ole Miss press conference. They had never used CAI before, but they wanted in.

Over the past decade, teams across college football have slowly began buying into this process. Slowly, the number of fourth-down conversions attempted has been on the rise. In 2018, fourth-down conversion attempts peaked at 2,812 attempts, a 34.7 percent increase in conversions compared to that a decade ago in 2009. Interestingly, as teams began going for it more, the average conversion rate has also risen by over three percent since the start of the decade.

In 2020, there are analytics for just about everything. Ole Miss is certainly going to be going for it on 4th down more, but that also means they might use a more aggressive approach at going for two. Where CAI provides analytical support for in-game strategy, there’re others that help provide this sort of analytical data for everything from recruiting to formation tendencies to budgeting. Just about every aspect of a program can be streamlined nowadays – it’s just about how teams are willing to accept change and deploy it.

For decades, coaches and athletes across all athletic disciplines have searched for tiny edges, something to give them the smallest advantage over competitors. Olympic runners have moved in masses to altitude, baseball went through a massive steroid epidemic and the way basketball has been changed has been completely changed by the rise of the three-point shot. Watching football teams go for it more on 4th down is the football equivalent of the three-point revolution.

In 2020, Kiffin is going to make some decisions that make some Rebels fans either scratch their heads, or more reasonably, shout expletives from bleachers of Vaught-Hemingway Stadium. Sometimes, those decisions will work out. Other times, the Rebels will go for it on fourth and fail to convert. But remember when that happens, it doesn’t make the math, or the decision to coach aggressively, wrong.