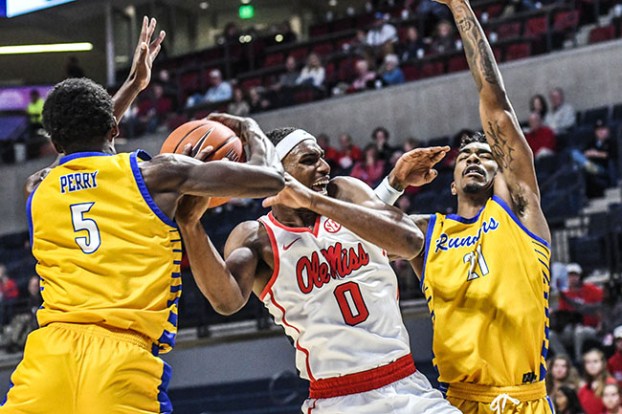 Ole Miss is 0-3 to start SEC play, and all anyone on this team can think of is finding a way to get that first conference win.

“Win. Win. Win. Get a win by any means necessary,” Blake Hinson said, speaking about the team’s mindset. “It’s still early though. There are teams that have finished higher in the league and had started 0-3. It’s still early.”

Ole Miss has had its chances. Even earlier this week, playing without two starters on the road in a loss to Florida, Ole Miss held a lead late in the first half against the Gators. Against Arkansas at home this past Saturday, the Rebels held an eight-point lead with just minutes to play before surrendering a late Razorback run in the loss.

And despite Hinson’s mood in Friday’s media availability or the losing streak, head coach Kermit Davis said he believes the team still has the right mindset to be able to find that first conference win.

“I think everybody does (need that win) in college basketball,” Davis said. “It’s a fine line. They haven’t been down. Our practices have been good. Our mood, when I walk into the gym these guys are laughing and upbeat. … We just have to find ways to try and win games.”

The Rebels played the Florida game without leading scorer Breein Tyree and starting center Khadim Sy. Tyree, who took a nasty fall in practice this past Sunday, had to sit out dealing with a bad bruise in his lower back that limited him. He’s hopeful to play Saturday against LSU. Sy didn’t make the Florida trip with the team. That one was a coaches decision, but he’ll also play against LSU.

It’s been a bit of a tough transition in Davis’s second year. Just four players on this current team played minutes in an Ole Miss uniform last season. Some key new additions, see freshman Austin Crowley and Sammy Hunter, have failed to really make an impact against Power-5 teams, says Davis. Other more experienced players that this team expected to get good minutes out of, see Luis Rodriguez and Bryce Williams, have been hurt. Williams, having missed time with a groin injury and played in limited minutes against Florida earlier in the week, is expected to be back to full strength against LSU.

It’s an Ole Miss team that’s pressing a little bit right now. They know they can play better, but they also know there’s a lot of season left to play. To them, getting back on track is simple – beat LSU on Saturday and they’re right back in the hunt.

Lafayette’s Kelle Sumrall has been named the Mississippi Boys Bowling Coach of the Year by the National Federation of State... read more