Rebels storm back but fall short against Missouri 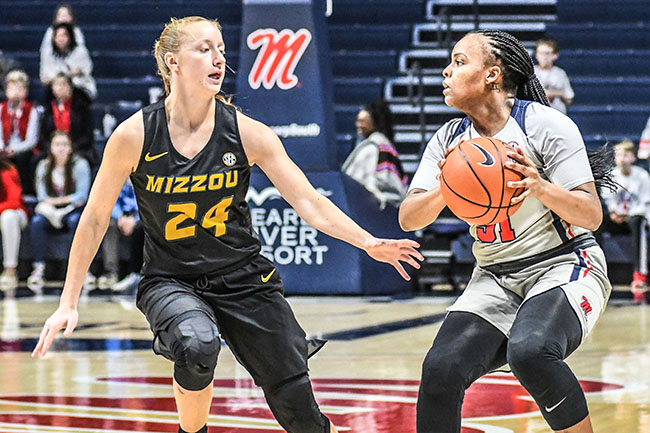 The Ole Miss women’s basketball team showed incredible resilience but ultimately fell to the Missouri Tigers, 71-57, at The Pavilion on Sunday afternoon.

Ole Miss (7-11, 0-5 SEC) clawed its way back from a large first quarter deficit, erasing a 22-point Missouri (5-14, 2-4 SEC) lead by the opening minutes of the third quarter, but the Tigers held on and extended after an excellent offensive showing in the final frame.

“I thought today we started off slow for whatever reason,” said Ole Miss head coach Yolett McPhee-McCuin. “I’m glad that we were able to pick it up and we made a strong push, but we just ran out of gas. What we take from this is that we can’t have starts like this. We have to give ourselves a chance from the beginning. We are just going to continue to fight and continue to push.”

Junior Deja Cage (19 points, three assists, two rebounds, one steal) hit the first of many buckets on Sunday on the Rebels’ first possession of the game, a jumper from the top of the key. However, that would be the final points for Ole Miss for nearly five minutes as Missouri ripped off a 13-0 run that included a 3-of-6 mark from beyond the arc. Missouri’s Aijha Blackwell (20 points, eight rebounds, four assists, two steals) recorded eight of her 20 points in that run and 10 total in the first quarter, including two of her three trifectas on the day.

Missouri led 22-6 at the end of the first quarter and had gotten out to a 32-10 lead by the 5:56 mark of the second, but then Ole Miss turned on the jets in spectacular fashion. The Rebels scored 13 unanswered over the next four minutes of action, including two treys from sophomore Taylor Smith (eight points, three rebounds, one assist) – who had only hit one three-pointer in her career entering Sunday.

The Rebels ended up closing the half on a 16-1 run, helped greatly by a second quarter shooting percentage of 50 percent and a 4-of-6 line from beyond the arc. Ole Miss extended that into a 23-1 run in the opening minutes of the third quarter after two more Deja Cage buckets and a layup from Dominique Banks (two points, six rebounds, one steal), tying the game 33-33 at 8:28 in the third on a Cage jumper.

A tug of war ensued for the remainder of the third as both teams traded buckets. Freshman Jayla Alexander (16 points, eight assists, one rebound, one steal) hit one of her three trifectas while being fouled at a crucial juncture at the 6:46 mark to cut the Tiger lead to one at 37-36, but could not convert the free throw to tie the game back up. From there, Missouri was able to separate to a five point lead at the end of the third before a 57.1 fourth quarter shooting percentage helped it separate toward the final score of 71-57.

Mimi Reid also had a solid game with eight points, as did freshman Bryn Parker in her first career start, scoring two points while hauling in five rebounds alongside two blocks – her third straight game with at least four boards since becoming a regular contributor in the Rebel lineup. The newest addition to the Ole Miss roster, former team manager and junior college transfer Tootie Rankin, played 17 minutes in her Rebel debut, scoring two points while adding three boards.

“This is the most I’ve heard from the alums this year, and that’s how it should be. When times are tough, they reach out,” McPhee-McCuin said. “We’ve had such a great time. For 100-plus alums to come out, I just can’t thank them enough.”