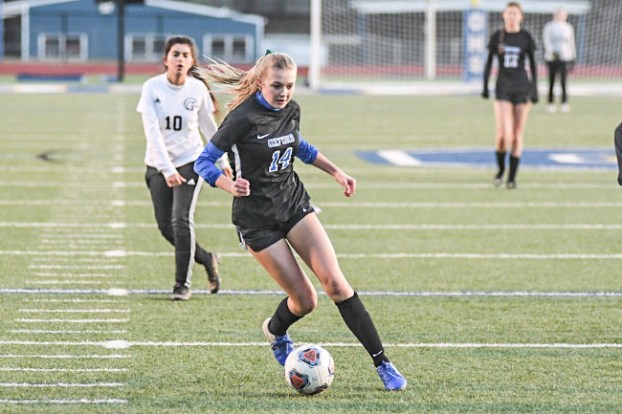 Both the Charger boys and girls were dominant on Tuesday night, wrapping up their regular season home slates with 7-0 and 5-0 wins over Horn Lake, respectively.

The girls jumped out to a really quick lead over the Eagles, scoring four goals in the opening 22 minutes. Two of the opening four were from senior Ruthie Jenkins. Senior defender Maggie Sudduth also got into the scoring, the two being the only seniors to score on senior night.

Girls coach Hunter Crane, up 4-0, opened the second half with all of his seniors on the pitch. At the first break in second half action, all the seniors came out to an ovation. It’s a group that’s special to Crane. Having been the head coach for five years now, he’s been with many of these girls since the eighth grade.

“All they know is me. I’m really appreciative for them and how they came out and bought in,” Crane said. “Some of them made impacts early in their career. Some made impacts late in the year. But this senior class is really special. Top to bottom we have really appreciated everything they’ve done.”

The girls would go on to beat Horn Lake 5-0. Now at 13-2-2 (5-0 in Region 2-6A), the girls have just one regular season game remaining until the playoffs. They take on DeSoto Central on the road Thursday, before returning home next Tuesday to open the playoffs.

Scoring came even more swiftly for the Charger boys, shutting out Horn Lake and mercy ruling them with a 7-0 win.

“I feel like I was a freshman when they were freshmen,” said head coach Charles Sabatier, in his fourth season with Oxford. “We all came into the program together. They’re the guys they’ve been with me all four years. I’ve gotten to know this group so well and I’m really proud of their effort in the way they’ve grown to lead this team.”

For this senior class, they were right there in 2017 as freshmen when Oxford won the state title in coach Sabatier’s first season as a coach. None of them played in the state title game. Now, hosting an opening round playoff game, it’s their turn to contribute in a title run.

“These seniors have a ring. But one of the things I’ve been saying to them is, ‘What does that ring mean to you?’” Sabatier said. “Let’s go chase after another that’s your senior ring. They’ve bought in and led this team in everything we’ve worked for.”

Both the girls and boys teams have just one game left, at DeSoto Central on Thursday night, before the start of the playoffs. Both having clinched a home playoff game, so it’s time to tune up for the postseason.

Ole Miss linebacker MoMo Sanogo is one of three Southeastern Conference student-athletes that will represent the SEC on proposed governance... read more