Will Ole Miss find Breein Tyree some help as they travel to Tennessee? 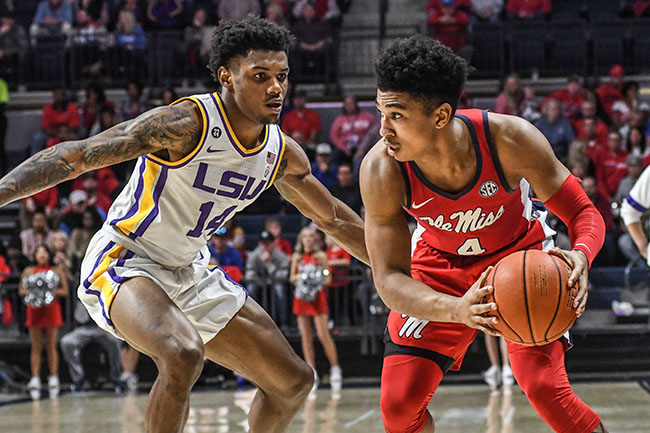 Breein Tyree is not fully healthy, but the lone Ole Miss senior is the only one consistently pulling his weight for the Rebels offensively. He needs help.

Tyree has played in just three of the four opening conference games for the Rebels, because he’s putting up these ridiculous numbers while hurt. Last Sunday, Tyree took a nasty fall in practice, sustaining what was described at the time as a back contusion. The injury kept him out of last Tuesday’s game at Florida.

Coming back on Saturday to face LSU, Tyree would admit he wasn’t 100-percent healed. At one point in the first half, after going up for a dunk, he landed awkwardly and limped his way to the bench. After a brief stint in the locker room, Tyree returned to the game. He scored 17 in the first half and a career high 36 in the game. Afterward, he corrected the injury as more of an upper glute issue, but was noticeably irked with the team’s five-game losing streak.

“This is really frustrating,” Tyree said on Saturday. “I’m trying to give this team everything I’ve got. My teammates are doing everything that they can. We just can’t get a win. … I’m going to keep trying till the wheels fall off. But it’s very hard.”

As the sole senior on the team, it’s his team to lead. However, he’s really not been getting much help of late. On Saturday, Tyree went for 36 points while shooting 60 percent from the field and 100 percent from the free throw line. Every Ole Miss player without Tyree on the back of his uniform combined to score 40 points while shooting 37 percent from the field and 0 percent from the free throw line.
Clearly, the Rebels need someone else to step up when they go to Tennessee on Tuesday to take on the 11-6 Volunteers. But who will that be?
The most obvious candidate is junior guard and fellow backcourt mate Devontae Shuler. A year after shooting 46 percent from a field and 40 percent from three as a sophomore, Shuler has simply regressed. Through this point of the year, Shuler is shooting just 39 percent from the field and 32 percent from the three point line. If Ole Miss is going to right the ship, they’re going to need that second member of what many thought could be an All-SEC backcourt to play like he did a year ago.
If the answer isn’t Shuler, Ole Miss is going to need one of their first-year guards to make an impact. Bryce Williams, when healthy, and freshman Austin Crowley have shown flashes for the Rebels, but may need to start helping more with the offensive load. Against LSU this weekend, only three Rebels finished with a positive plus-minus when on the court. Williams and Crowley, despite scoring just three points combined, were two of them.
Williams, a junior college transfer, is shooting a team-high 55 percent from three-point range on limited attempts. Kermit Davis and the Ole Miss staff may be well suited finding ways to get him corner shots. Whereas Crowley had a season high six assists for Ole Miss on Saturday.
The point being, literally anyone except for Tyree needs to step up if Ole Miss has any shot at turning the season around. It could be one of these three, it could be Blake Hinson deciding to be a more balanced player or Khadim Sy becoming a force on the interior. But simply put, Ole Miss cannot continue being a one-man threat.
Ole Miss gets back at it on Tuesday night at Tennessee, the first of a week of two road games for the Rebels. The game will be televised on SEC Network and begins at 8 p.m. Central Time.