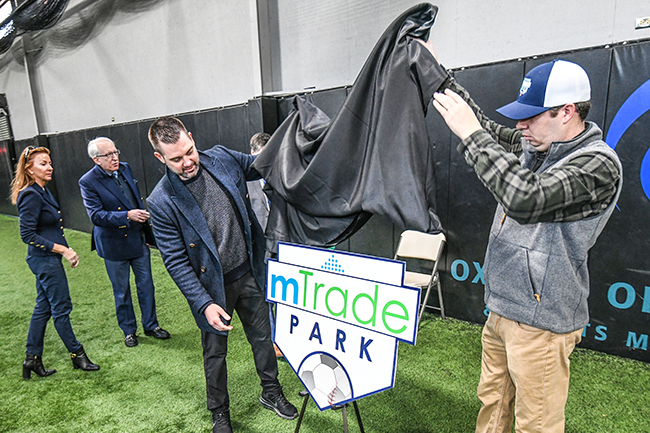 Formally known as FNC Park for the last 10 years, the park unveiled its new name, mTrade Park, and logo on Wednesday. A presentation took place at the park’s indoor hitting facility.

“I’ve been here for 14 years when this place was just a cotton field, and to see it grow into what it is today is just truly amazing,” said mTrade Park director Brad Freeman. “There was nothing out here (14 years ago), but I had a great plan, I knew that.”

Freeman announced the purchase of the naming rights by the Oxford-based mortgage software company last September, ending a relationship with FNC, Inc. that began in 2008 when the complex was called Oxford-Lafayette Fields.

In 2009, Freeman had a modest goal of hosting eight tournaments in the complex’s inaugural season. In 2019, the park hosted 38 weekend events, hosted more than 2,400 teams and played over 6,000 games between soccer, baseball and softball.

“I can tell you (FNC and mTrade) have impacted our community as far as tourism and economic development goes, but also as far as community development goes,” Oxford Mayor Robyn Tannehill said. “There are a lot of life lessons learned out here on these fields that wouldn’t have happened if it weren’t for their commitment.”

Tannehill noted mTrade Park’s estimated economic impact in Oxford in 2019 was around $4.5 million.

Oxford’s Robert Gonzalez a National Swimming Coach of the…