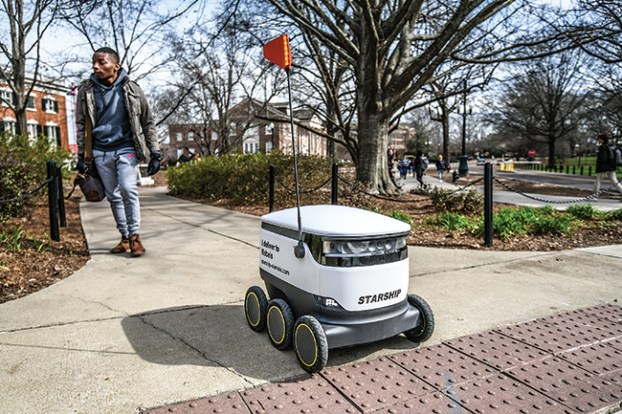 The University of Mississippi is continuing to evolve 20 years into the 21st century, and one of its latest examples of evolution deals with how students can receive food.

In conjunction with the start of the Spring semester, Ole Miss Dining debuted food delivery robots from Starship Technologies. The fleet of 30 robots can deliver meals, snacks or drinks at the push of a button.

A demonstration of the robots’ capabilities was held in front of the Ole Miss Student Union on Wednesday.

Students, faculty and staff can have food delivered to their location by using the Starship Deliveries app on iPhone or Android devices. Ole Miss is the first Southeastern Conference school to provide the service.

Meetings were held with the University and Starship Technologies last September, and the robots began being seen around the end of Fall semester as they were mapping the campus.

“It did happen very quickly, actually,” said Ole Miss Dining and Aramark marketing manager Amy Greenwood. “It happened a lot faster than we expected. It was great.”

Starship Technologies specializes in robots, such as the ones seen around campus delivering food, and their main focus currently is colleges across the country. They also have robots deployed in Europe as well.

Setting up the app is as simple as opening it up on a smart phone and setting a pin to the location the customer wants their order delivered. With 30 robots on site, restaurants across campus will make the order and put it inside one of the waiting robots. The customer will then be given an estimated time of arrival for when they can expect their order.

The lid is locked on the robot during transit, and only the customer who placed the order can unlock the lid with their phone. The customer can also track their order in real time and watch the robot’s progress on the app.

“It’s very simple,” said Sandra Sooläte, head of business development at Starship. “Like any food delivery app, but instead of getting a car or a computer or however it would be delivered, you get a robot.”

Most deliveries will take a few minutes, but depending on the menu items ordered and the distance a robot must travel could alter delivery times. The robot can hold up to 20 pounds.

The robots use a combination of sophisticated machine learning, artificial intelligence and sensors to travel on sidewalks and navigate around obstacles. The computer vision-based navigation helps the robots to map their environment to the nearest inch. They can cross streets, climb curbs, travel at night and operate in both rain and snow.

During busy times on campus, such as class changes when the bulk of students are all walking at one time, the robot could take a little longer to arrive as it stops whenever it senses someone near it and will not start again until it senses the path is clear.

The 2020 Mississippi legislative session is in full swing, and one state senator is proposing a bill which would prohibit... read more