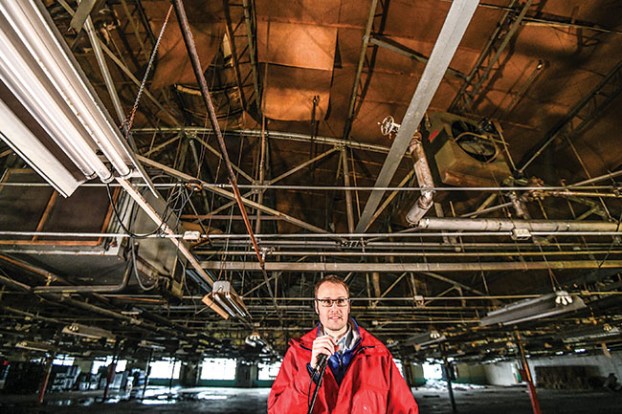 After spending its first years above B.T.C. Grocery, Water Valley’s Base Camp Coding Academy is moving down the street and attracting national attention.

Renovations are set to begin in an abandoned garment factory building, located at 803 Central Street, which will be Mississippi’s first Rural Education and Innovation Hub. The Hub, called Everest, will house Base Camp going forward.

A groundbreaking ceremony for the $4.7 million project took place on Thursday. All the funds were generated through donations, and took nearly two years to raise with $2 million coming from five federal agencies (ARC, DRA, UDSA, DOL and TVA) and leverages on Historic tax credits, New Market tax credits and Brownfield Redevelopment tax credits.

Starting with a three-year pilot program, co-founders Glen Evans and Kagan Coughlin said they wanted to see if the whole concept of giving under-advantaged Mississippi students an opportunity to go through the academy would work, and if they would be work-ready at the program’s completion.

“It went really well, and we went back out to the business community and asked, ‘Do you want more of this? Is it worth funding?’ and everybody said yes,” Coughlin said. “So, then we had to think about how do we grow it, and one of the first things was second floors of historic buildings aren’t ADA compliant unless there’s an elevator, and very few have those. So, we were looking around (for) something ground floor with more space (where) we could build more classrooms.”

Northwest Mississippi Community College came along and asked Base Camp if they could find a space big enough for them to “co-locate,” according to Coughlin. Currently, NWMCC has zero presence in Yalobusha County.

Coughlin found the 64,000 square-foot garment building, which the City of Water Valley owned, began the process of putting together a creative strategy to get the money needed to renovate the building to meet current code requirements.

Base Camp is a nonprofit program in which Mississippi high school seniors are nominated by one of their teachers and asked to complete an application. If the senior is accepted, they will begin the one-year program a month after graduation. The program is free of cost to the student, who is given a full scholarship that totals $15,000.

Throughout the course, students learn to become software developers in hopes of landing a job immediately upon graduating from Base Camp. So far, there is a 90 percent participation and graduation rate among students in the program.

The academy is starting to get attention of national companies as well, with Facebook announcing they will fund three Base Camp scholarships for two years, giving six students the opportunity to receive an education from the academy. Facebook contacted Coughlin this past fall, expressing interest in involvement with the academy.

“Folks all over the place have been pointing out that we have this untapped resource in the middle of our country,” Coughlin said. “Just rural youth that have not had access to the tech sector. We’re excited that kind of the large coastal players are picking their heads up and looking inward.”

While Base Camp is moving to its own building, there are no plans to expand the program at this time. Coughlin said he wants to have roughly 35 students per classroom, with the goal of graduating 25 software developers every year.

Water Valley resident’s quilts to be exhibited in South Carolina

Coulter Fussell is a painter first, but adding quilting to her skillset has paid off as she prepares to exhibit... read more