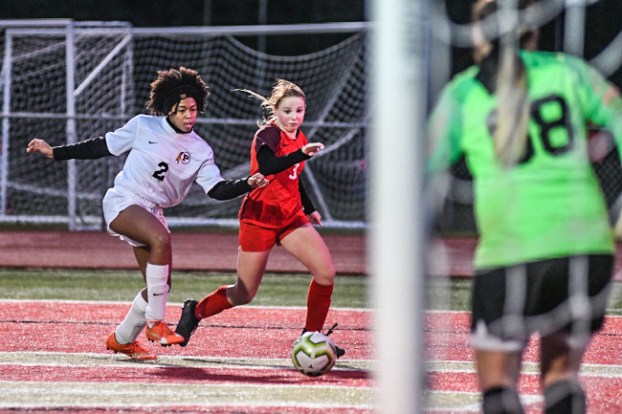 Lafayette caps regular season with a pair of wins over Pontotoc

The hay is in the barn and Lafayette’s girls soccer team is ready to defend their Class 5A state championship from a season ago.

Lafayette put a bow on the regular season on Friday with a pair of wins over Pontotoc in their final tune up before the 5A playoffs begin next week. For the Lady Commodores, it was an opportunity to build some confidence and they received that opportunity with a 2-1 victory.

The Lady Warriors’ strategy was to play defense with nine players stationed on their side of the field the entire match, making it difficult for Lafayette (17-4-1) to find the net.

“It is difficult to create more chances. I’m proud of this team for creating chances,” said Lafayette girls head coach Melinda Scruggs. “In the past it was harder for us to come back from behind or even a tie and we were able to say, ‘Hey, we need to put one in the back of the net,’ and they did.”

Caroline Wilson broke the scoreless tie in the final minutes of the first half with a goal in the 35th minute to give Lafayette the 1-0 advantage at halftime.

Looking as if Lafayette was going to escape with a one-goal victory with the minutes ticking down in the second half, Pontotoc managed to provide some pressure late in the match. The Lady Warriors leveled the match a 1-all with a goal in the 66th minute.

Wanting to find that confidence entering the two-week postseason, Hudson Lindsay provided it with an answer six minutes later to give the Lady Commodores the winning margin with eight minutes remaining in the match.

“I hope we don’t get to that scenario but I know now, and there’s a couple games just recently where we’ve come across that and we’ve rose to the occasion,” Scruggs said. “That’s what we need.”

The Lady Commodores will begin their 5A playoffs at Grenada on Tuesday. Their first round match is scheduled to begin at 5 p.m.

Boys use PKs for win

Confidence was even more key for the Lafayette boys team entering next week’s playoffs and they managed to create some for themselves.

The Commodores concluded their up and down season with a 3-2 win over Pontotoc, edging the Warriors in penalty kicks by a 3-0 score. Pontotoc failed to score on their first four attempts with Lafayette connecting on three of their first four to get the win.

“We practice penalty kicks probably two, three times a week to end every practice,” said Lafayette boys coach Gene Anderson. “I felt like we played pretty well. We’re not going to wow you with our possession, but when we get the ball we attack as fast as we can. When we shoot it we make the most out of our shots.”

Pontotoc answered with a goal by Alan Morales seven minutes into the second half to cut the Commodores’ lead in half. Lafayette managed to hold onto that one-goal advantage for the majority of the second half until Pontotoc tied the game at 2-all with a goal inside the final two minutes of regulation to force the penalty kicks.

Lafayette now travels to New Hope to begin the 5A playoffs on Tuesday. The match is scheduled to begin at 6 p.m.