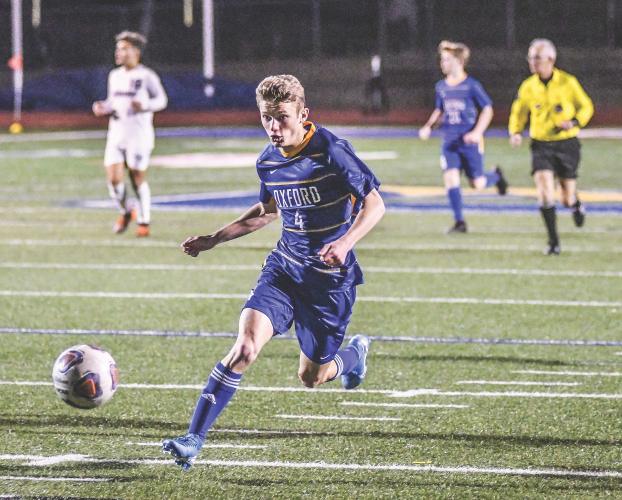 For the last two years, Luke Freeman has been the main driving force behind an Oxford team that’s won quite a few soccer matches.

This year, however, his last in a Chargers uniform, his approach has maybe been a little different.

“He has stepped up and become a leader on the field,” head coach Charles Sabatier said. “He’s not just scoring goals, now he’s also creating opportunities for other guys to score goals. This year, he’s done a better job to push the other guys and work harder and get everyone to play smarter soccer.”

Freeman was hurt to start the season. He wasn’t himself, and that quick burst wasn’t always there. Despite the missed time and others playing less than 100 percent, Freeman still led the team in goals (15) and assists (9). Even with that missed time, the nine assists is his career high.

There’s a few seniors on this Chargers team who already have a state championship ring – Freeman is one. They may have played a little bit their freshman season when Oxford won state in 2017, but none of them appeared in that state championship game.

It’s something their coach won’t let them forget.

“All of the seniors on this team are carrying the team, Luke maybe more so than anyone,” Sabatier said. “These seniors have a ring. But one of the things I’ve been saying to them is, ‘What does that ring mean to you?’ Let’s go chase after another that’s your senior ring. They’ve bought in and led this team in everything we’ve worked for.”

Freeman has a bit of a genetic lineage. His mom played soccer at Virginia Tech, and his dad was drafted into major league baseball. That gene pool contributes to his quick twitch on the field, but right now it’s hardly on his mind. Oxford and Freeman have one goal – bringing home that second state title, their senior title. That all starts Tuesday with their playoff opener.

Oxford’s girls soccer team went through a bit of a transition this year. For the first time in their high... read more