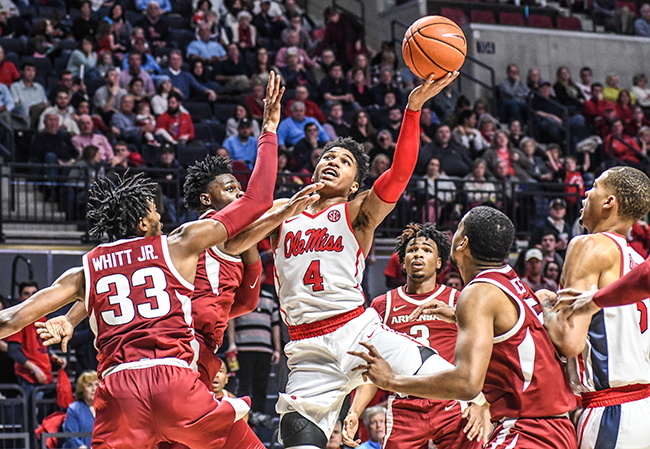 Kermit Davis was blunt following Tuesday’s loss to Tennessee, the team’s sixth in a row.

“It’s on me. It’s recruiting. We have to continue to develop players. We’re just inept on offense,” Davis said on Tuesday after the Tennessee loss.

When asked how to fix the situation Ole Miss is in, Davis said it was simple: recruiting.

It’s not a foreign idea. At this level, coaches recruit just about daily. The coach also mentioned the need to continue to develop the players they have. Regardless, the statements were strong words from a second-year coach whose team is in the roughest stretch of his short tenure.

“We watched the tape a couple of times and saw it live. I just thought we had some plays that we have to make. So the guys in our program, we have to do a better job of developing them,” Davis said on Thursday, elaborating on previous statements from the Tennessee game. “But we have to add some pieces for next year that can go make SEC plays. So recruiting is always important, and I think it always gets to be extremely important when you go through tough stretches in rebuilding, like we’re going through right now.”

Last year’s NCAA Tournament bid, winning 10 SEC games in the lead-up, showed the promise of Kermit Davis and this new era of Ole Miss basketball. However, that team was mostly not his team. It was a team mostly inherited from former head coach Andy Kennedy. Breein Tyree, just about the only Rebel doing much of anything productive on the court currently, is a senior also recruited by Kennedy.

It’s not like Kermit Davis isn’t doing anything on his own. His first recruiting class at Ole Miss ranked top-50 nationally and included a four-star player in freshman guard Austin Crowley. The 2020 class currently has one commit, another four-star player: the No. 47 overall recruit in guard Matthew Murrell.

But that’s next season. Right now, all the Rebel staff can do is work with what they have. Tyree is playing like one of the better guards in the country, despite being on a team that’s yet to win an SEC game. However, one of the guys the team really needs to step up is a freshman forward the team expected to get more out of down low: Sammy Hunter.

“His motor has to get better. I still think Sammy is a good talent, but he’s not reacting quick enough to the ball,” Davis said of the freshman. “The one thing that’s a premium in our league is your ability to change shots. We’re last in the league in blocked shots. So he needs to be quicker off his feet. He’s a pick-and-pop guy that can do some things (offensively), but he has to be better defensively and rebounding the ball.”

The rebounding in particular has been an issue for Hunter. At 6-foot-9, the freshman is playing 13.8 minutes per game. Yet, despite his size and time on the court, he’s averaging just 1.5 rebounds. In his last three SEC games, Hunter has accumulated only one rebound.

When he’s on the floor, center Khadim Sy has been far from dominant, but he’s been a sort of stabilizing force down low for an Ole Miss team in need of just that. The big man was the only Rebel with a positive plus-minus against Tennessee on Tuesday, but he was only on the floor for 12 minutes because of foul trouble.

Current trajectory of the Rebels team doesn’t look promising. They’re 9-9 (0-5 SEC) and in the midst of the longest losing streak in Kermit Davis’s Ole Miss tenure. There’s talent on the team, and Davis insists they’re still 100-percent bought in despite the rough stretch; they just need that talent to show up.