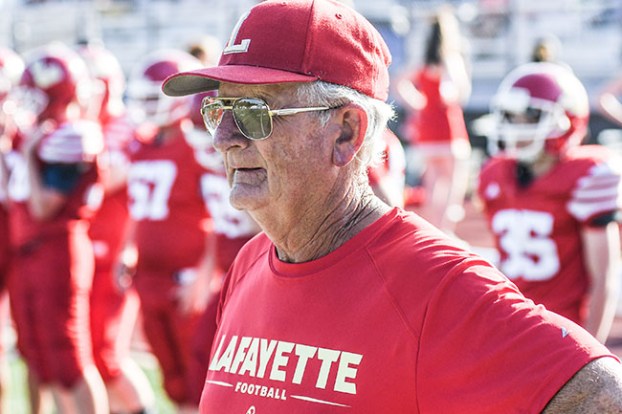 It’s hard to find something that Lafayette’s Jimmy Murphey isn’t involved with within the Commodores athletics department.

He’s coached football, baseball and softball, and helped out with so much more. Now, he’s being nominated for the National High School Athletics Coaches Association (NHSACA) award for best boy’s assistant coach in the nation.

If you need to know just what Murphey means for the Commodores and all the help he’s given to everyone in his 47 years working with the school, go no further than to ask their current athletic director.

“Just personally, he’s always been great for me,” said Lafayette athletic director Greg Lewis. “When I moved over here 12 years ago to take over the baseball team, I had never even met coach Murphey. But he talked to me over the phone and said, ‘Don’t worry about it. I’ll run things when you need me to. I’ll take care of the boys, you just get up here once you get situated.’ But he never helped me with baseball after that. He didn’t need to. I just thought it was neat that a guy like that would take it on when he didn’t have to.”

Murphey plays a myriad of roles within Lafayette County School District. Technically, his title is the Assistant Athletic Director to Lewis. However, he also coaches middle school football, is helping out with both middle and high school softball, is at every soccer game, cuts the grass at the high school and drives teams to and from games.

“Greg and I split basketball, but I do all the the soccer. It’s at the point that, I think soccer would be shocked if I wasn’t at all of their games,” Murphey said, laughing. “For me, it’s just fun. I still need something to do, and this stuff is fun.”

Murphey started at Lafayette in 1974 as the head baseball coach. In that same time frame, he started the first local little league in the Oxford area. Soon after, he was coaching 7th to 9th grade football, at the time coaching the entire team by himself.

Now, he’s just the go-to guy at Lafayette. Wherever he needs to be, he’ll be without hesitation.

“If you need something, Murph is the guy that you go to. It’s been that way as long as I’ve known it,” Lewis said. “When I took over the AD job, he came and asked if I still wanted his help. I said, ‘Of course I do.’ He’s as big a part of all this as anybody. Just because I’m the AD, he’s kind of the AD also. I wanted to keep it that way.”

All nominated coaches for the award will meet in July in Omaha, Neb., where the winners will be decided.

Lafayette caps regular season with a pair of wins over Pontotoc

The hay is in the barn and Lafayette’s girls soccer team is ready to defend their Class 5A state championship... read more