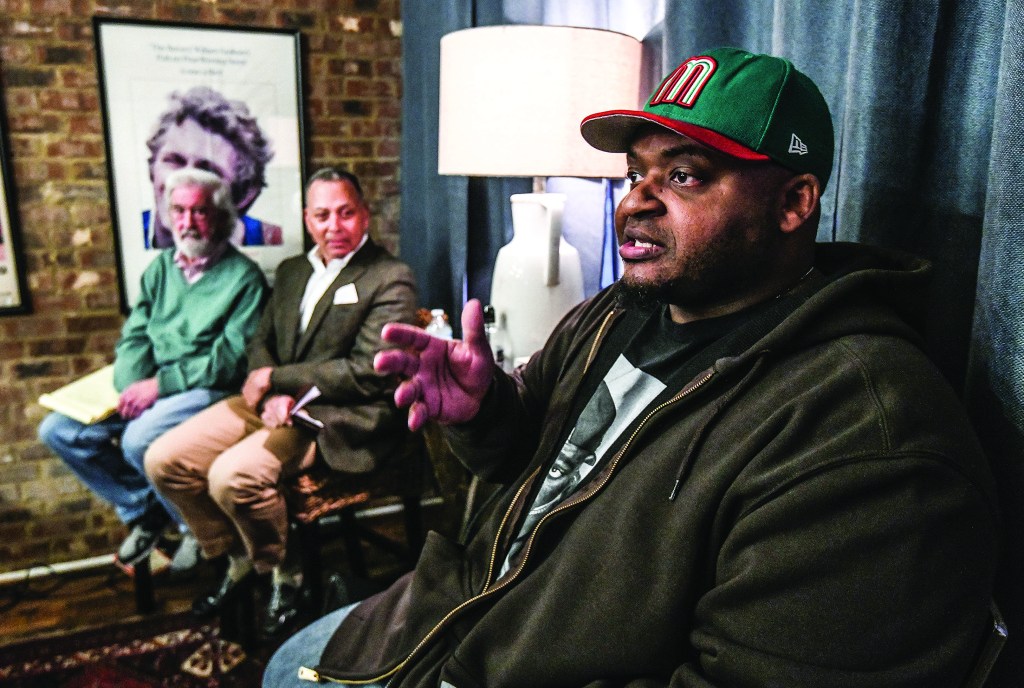 Conversations take place all the time at coffee shops across the world, but Leighton McCool had the idea to take that a step further.

Inside her Lost Dog Coffee shop, located at Plein Air in Taylor, the first of what McCool hopes are many “Coffee Conversations” took place on Sunday. With a room full of people, author and Ole Miss professor Kiese Laymon held court in the inaugural event.

Laymon was the featured guest, and took part in an hour-long conversation with fellow Ole Miss professors Curtis Wilkie and Ralph Eubanks. Wilkie served as emcee while Eubanks served as moderator.

The idea for the “Coffee Conversations” is to have an author take part in a meaningful discussion on topics that could range from whatever project they are working on to issues that are affecting Mississippi and beyond.

Several hot-button issues were discussed, sandwiched around discussion on Laymon’s book, “Heavy.”  One issue discussed was the Confederate statues located on the Downtown Square and the University of Mississippi’s campus. Laymon did not hold back when giving his thoughts on the statues.

“We have not made it important enough to take down a symbol that says, in no uncertain terms, that all black folk walking around (Oxford) are labor,” Laymon said. “They are not people, they’re labor. … If we just want to talk about white folk in this state, we have so many examples of wonderful white folk we could make into statues. We choose to make, I think, the worst folks into statues, and we choose to not push that down.”

The conversation shifted toward “Heavy,” Laymon’s latest book, a memoir that came out in October 2018. The book chronicles Laymon’s life as he dealt with living in Jackson as a child, his mother, weight issues and being a survivor of physical and sexual abuse.

Laymon noted writing the book was something he had been trying to do since he was 12, and said he was still experiencing several of the events depicted in the book. “Heavy” was also one that caused much pain within his family and circle of friends, causing some relationships to be lost, Laymon said.

“I did not take into consideration how it would impact my relationships with people in the world,” Laymon said.

Upon the book’s release, it received critical praise and won numerous accolades, including the Andrew Carnegie Medal for Excellence in Nonfiction. The book is also in development to be adapted into a movie. Laymon said he was approached to the do the screenplay, but turned down the opportunity. He is, however, serving as an executive producer.

Laymon is now working on his next book, as well as a project he described as “essay-ish,” coincides with 2020 being an election year.

The next “Coffee Conversations” event is not scheduled yet, but after Sunday’s turnout, McCool said she wanted to host another as soon as possible. Initially, the idea was to hold the events every three months, but McCool said Sunday’s response has her rethinking those plans.

“What a night,” McCool said. “I’ve got several (upcoming guests) in my head and several were in there tonight that I’ve whispered to that I hope they’ll be our next, but they’re special people. … I’m so energized right now that I’m ready to do the next one.”

Board of Supervisors appoint new planning commissioners, EDF board…