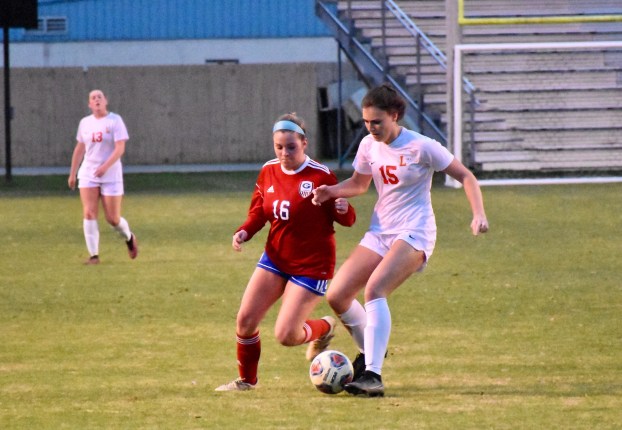 Hudson Lindsay possesses the ball in the Lafayette playoff opener on Jan. 28, 2020 in Grenada, Miss. (Photo by Jared Redding)

GRENADA — Going into Tuesday’s game, Grenada had not allowed a goal since December 13. That didn’t seem to phase Lafayette and Hudson Lindsay one bit.

The Lafayette Lady Commodores began their state title defense on Tuesday by defeating the Grenada Lady Chargers 3-0 in the first round of the MHSAA Class 5A playoffs.

“I was very proud of them. I told our girls, the one challenge I said to them, was to play a full 80 minutes and I think we accomplished that tonight,” said head coach Melinda Scruggs. “I think we played more as a unit and were able to put the ball in the back of the net. Even on defense, we were able to come up big in some different situations. All together a good win.”

It took some time for Lafayette to get a shot off as Grenada dominated time of possession for the majority of the first half. The Lady Dores finally broke through with a penalty kick from Lindsay, drawing the game’s first blood . Grenada had plenty of opportunities in the closing moments of the first half, but couldn’t convert.

Lindsay again made the Lady Chargers pay with her second goal of the game late in the first half, rebounding off the goalkeeper’s save to give Lafayette a 2-0 lead. The Lady Dores never looked back.

“(Lindsey) is confident right now. A lot of it has to do with everybody working together,” Scruggs said. “I think we were able to keep possession of the ball, playing very quickly, getting behind them. It is very hard to get behind this team. They’re very good defensively. They have a lot of numbers behind the ball. So being able to find the seams, finding spaces and they were able to do that.”

It wouldn’t take long for Lafayette to get another one, this time from Lucy Wilson with a mid range shot that found the top corner of the net early in the second half. That iced the game as Lafayette controlled most of second half possession.

“We’ve been trying to take it one game at a time… We’re up for any challenge right now,” Scruggs said.

With the win, Lafayette has reach the second round of the playoffs for the third straight year, last year going all the way to win 5A state. The Lady Dores will take on the winner of Ridgeland and Jim Hill this Saturday.

Ole Miss lost one of its football legends Monday, in Natchez, Mississippi, with the passing of Allen Brown, 76, following... read more