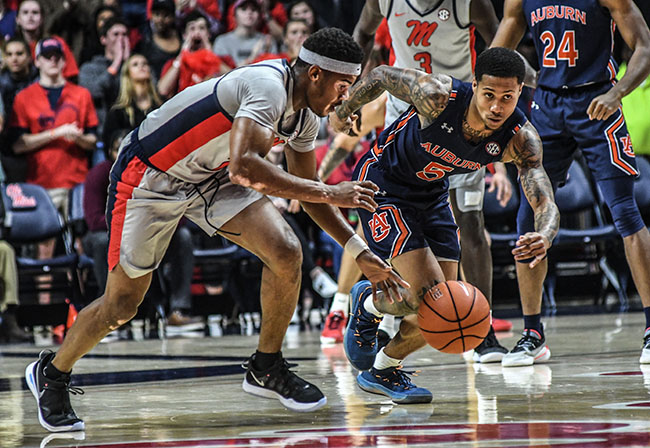 They did all this to blow another lead, losing a brutal, exhausting and mind-bending 83-82 double-overtime thriller to No. 17 Auburn at the Pavilion on Tuesday night.

“That was just about the craziest game I’ve seen in a long time,” Auburn coach Bruce Pearl said. “Both teams, all the kids battled and played so hard. We didn’t always play well, but coach (Davis) had them ready, like he always does.”

The story of the first half for Ole Miss was their defense. Ole Miss opened the game at home by building up a 17-3 lead, at one point holding the Tigers to just one point over an eight-minute stretch. In the first half alone, the Rebels forced 10 Auburn turnovers and held a team that loves to shoot the long ball to 1 of 12 on three-point attempts. That defense propelled a strong first-half run, taking a 37-20 lead into the half.

However, there’s a reason Auburn is the nation’s No. 17 team. The Tigers opened the second half by scoring ten points – half of the team’s entire first-half output – in a span of just over three minutes, thus cutting the Rebel lead to 39-30. Ole Miss would re-open their lead before a pair of Auburn threes cut it even closer. With 10:21 to play, the Ole Miss lead that once stood at 17 points was down to five.

With Ole Miss leading 63-54 and 5:15 left to play, Ole Miss’s lone senior Breein Tyree fouled out of the game. Tyree, the SEC’s leading scorer in conference play wasn’t having his best game – he scored 8 points in the game – but the team looked completely different down the stretch of regulation without their senior leader. In that final 5:15 of play, Auburn closed on a 12-3 run. The only Rebel points over the stretch came from free throws.

“The basketball gods have a great way to work,” said Ole Miss head coach Kermit Davis. “Breein got a couple of touch fouls, and he’s out of the game. … But late, we settled some for threes. We had some balls at the goal that we didn’t finish. It was a number of things.”

Regardless, Ole Miss was able to hang on late. Ole Miss needed two clutch free throws with 27.5 seconds to play to tie the game at 66. They got them. They then held Auburn scoreless over the final seconds to force overtime.

A Bryce Williams transition slam changed everything in overtime for Ole Miss. Down 75-70 with 1:11 to play in overtime, Ole Miss looked dead in the water. Then the junior got in transition, his dunk sparking a beautiful Rebel run to tie the overtime possession. The Williams dunk was followed by a pair of Auburn free throws. Devontae Shuler then answered with an and-one conversion and two more free throws on the next possession. Just like that, Ole Miss had tied the game at 77. Both teams had a shot to win the game in overtime and both teams failed to convert. The game went to double overtime tied at 77.

The second overtime period played in stark contrast to the first. This time, it was Ole Miss building up and letting slip away an early 82-78 lead. Ole Miss had a chance late. The Tigers missed a shot that could have put the game away with seconds to play, giving Blake Hinson a three-point shot from the top of the key at the buzzer. Hinson grabbed the board, taking a handful of seconds to realize there were under ten seconds remaining in the game, before moving quickly up-court. His three-point shot attempt shot grazed the rim, falling left. Final score: Auburn 83-82 in double overtime.

“That last play, with Blake, I didn’t want to have a timeout because they were kind of switching into a zone. I wanted him to play downhill. I couldn’t imagine he’d jump and hit a 20-footer. You have to drive up the ball and force a foul and end the game,” Davis said. “We don’t feel like a 1-6 team. We don’t look like one, but we are one. We have to do the things at the end of games to win.”

With Tyree sidelined, it was Devontae Shuler leading the way for the Ole Miss offense. The Rebel junior scored 26 points in the game, playing a whopping 48 minutes. Hinson added 16 points and Khadim Sy had 13 points and seven rebounds of his own, one of his better games down low on the season.

Oxford soccer opens 6A playoffs with sweep of Lewisburg