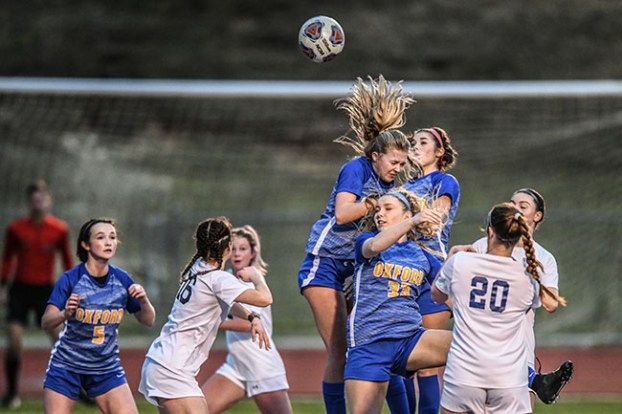 Oxford High's Parker Martin (33), Ivy Dennis (14), and Grace Freeman (3) go for the ball in front of the net on a free kick against Lewisburg in MHSAA Class 6A playoffs at Bobby Holcomb Field in Oxford, Miss. on Tuesday, January 28, 2020. (Bruce Newman, Oxford Eagle)

Oxford soccer opens 6A playoffs with sweep of Lewisburg

When it comes to the Class 6A soccer playoffs, there are no easy games.

Tuesday night was no different in the first round matchup between Oxford and Lewisburg. When the two met on Nov. 15 they combined for six goals in the Lady Chargers’ 4-2 victory at Lewisburg. On Tuesday, it took over 78 minutes before the first goal was scored at Bobby Holcomb Field.

Kathleen Myers’ goal was the difference maker in Oxford’s 1-0 victory over the Lady Patriots, sending them into Saturday’s quarterfinal round.

Lewisburg (14-5) kept possession the majority of the first half which in turned put the pressure on the Lady Chargers’ goalkeepers. After being hurt for much of the second half of the season, Mary Anna Fulton got the start but ended up being replaced by Ainsley Tacke in the second half due to suffering an injury. Swapping the goalkeepers out was part of Crane’s plan but Fulton’s injury put that plan into action earlier than anticipated, though the sophomore handled Lewisburg’s attack and kept them scoreless.

“Ainsley’s done a great job filling in for her while Mary Anna was out and we had huge confidence (in both of them),” Crane said. “Ainsley came in and made some real big saves there at the end. We had control in the second half, but (Lewisburg) had a couple opportunities and she handled those really, really well.”

The jump from Class 5A to 6A is a steep test, and Lewisburg found that out on Tuesday.

The reigning 5A state champions from a year ago were punched in the mouth early by Oxford and never recovered in the Chargers’ 5-0 win.

Oxford (12-5-2) got a wake up call in their 5-1 loss at Tupelo on Jan. 14 and since then have been playing some of their best soccer, outscoring opponents 13-2 in their last two games of the regular season.

“In the playoffs you’ve got to play your best soccer and our last two matches we played great,” said Oxford boys coach Charles Sabatier. “We got a little slap in the face by Tupelo, but sometimes you need a little shake up and I think that loss to Tupelo shook us up.”

Joel Sandoval got the scoring started early with his first of two goals in the sixth minute. The Chargers lead doubled 14 minutes later with a goal by Stone Tosh and Spencer Norris made it a three-goal advantage entering halftime.

Sandoval’s second goal came in the 54th minute and Max Mobley provided the winning margin with a goal in the final two minutes. Five goals by four players is the style of offense Oxford has relied on this season.

Oxford will host Madison Central in Saturday’s quarterfinal round at 3 p.m.