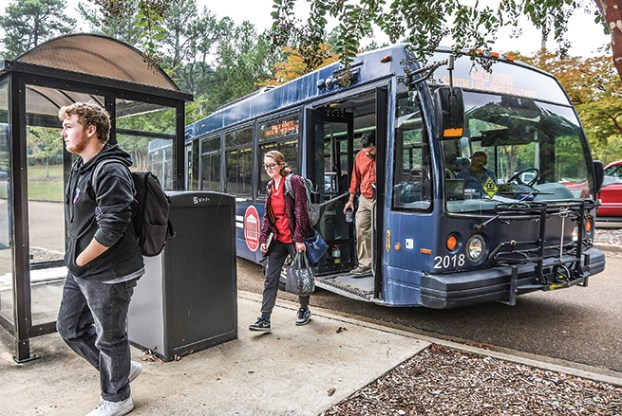 Those who rely on the Oxford University Transit system to get to and from the University of Mississippi will begin to see changes this semester.

Buses have begun to implement technology improvements and routes will begin to be consolidated, the University announced on Tuesday. Students who take the Green Line and Old Taylor Road Express are using new buses, and four additional buses will be rolled out in February, which will replace some of the older and less reliable buses OUT is currently using.

The new buses will have a low floor and two doors to help make boarding easier and faster. New buses will also mean less unscheduled maintenance and shutting down routes for periods of time.

Another addition is the ability to use the public transit tab on Google Maps to navigate OUT routes, beginning in February.

“It will generate a public transit map for you, show route color, tell you where to transfer and even how many steps to take from one bus shelter to the next,” said OUT general manager Donna Zampella.

The ultimate goal for OUT, Zampella said, is to replace their current NextBus app with the real-time QRyde app before the fall semester begins in August. Under the QRyde system, each bus will be equipped with a tablet to deliver real-time bus locations for riders. The NextBus app only provides estimated arrival times, which could vary due to weather, traffic or number of passengers on each bus.

A major change regarding campus routes is the consolidation of the Rebel Red and Rebel Blue lines. The campus circulator shuttles have been reduced from two buses each direction — clockwise and counter clockwise — to one bus in each direction. The routes were reduced due to an overall need for more buses within the OUT system, as well as low ridership.

The Silver Line, which connected the Park-N-Ride areas at the South Campus Recreation Center to the Kennon Observatory Transportation Hub will be incorporated into the Green Line and the OTR Line. Silver Line riders may notice a difference in wait times compared to last semester, but the times should be comparable to the other Park-N-Ride lots at the Jackson Avenue Center and the South Lot.

More changes could be coming outside of campus. During the Jan. 21 Board of Aldermen meeting, Zampella expressed interest in gradually expanding the OUT service into Lafayette County and said she hopes to speak with the Board of Supervisors in the near future.