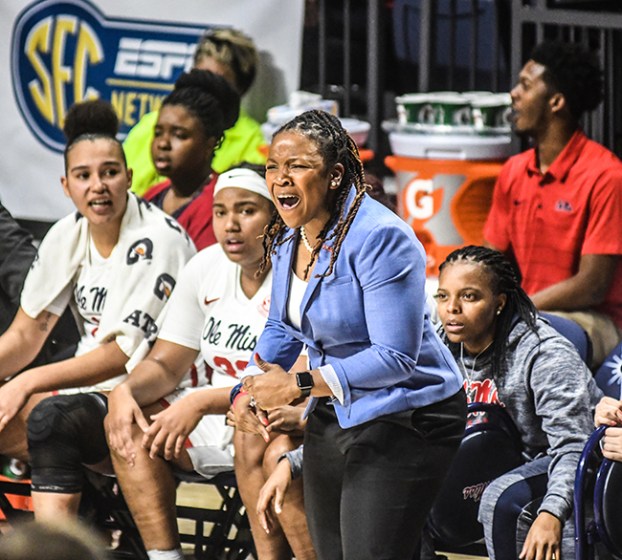 Mississippi head coach Yolett McPhee-McCuin reacts during the game against Mississippi State at the Pavilion at Ole Miss in Oxford, Miss. on Thursday, February 21, 2019. (Bruce Newman, Oxford Eagle via AP)

“Coach Yo is going to turn this program around”: Why SEC coaches believe in McPhee-McCuin

It’s been ugly at times this year.

On the surface, there hasn’t been much optimism or much to be excited about regarding the Ole Miss women’s basketball program. Since taking over the women’s team at the start of last season, the Rebels have gone 16-36 and won just three SEC games – none yet this year.

Yet, despite the lack of success on the scoreboard, there’s a continuous, optimistic trait that seems to be popping up, unprompted at every turn.

Just about every SEC coach that comes into the Pavilion has gone out of their way to credit the job and the rebuild that Yolett McPhee-McCuin is doing at Ole Miss. And it’s not the sort of side remark done just to be polite. Somehow, you can tell they mean it.

“I always just tell Yo that, in my second year at South Carolina, it was very similar. We weren’t getting the results we wanted. We probably out-worked people, but we were out-talented,” said South Carolina head coach Dawn Staley on Thursday. “But you have to stay true to who you are and who you want to become, meaning that you have to be disciplined to your culture. Sometimes that means you might lose a player here or there, but the results will take care of themselves. If I’m a betting woman, I’m betting that Coach Yo is going to turn this program around.”

Staley has been at South Carolina since 2008, building the team into a powerhouse and winning the school’s first ever National Championship in 2017. In the last six years, the Gamecocks have lost 27 games.

Yet, these sort of remarks feel real coming from someone like Staley – it wasn’t always pretty for her in Columbia either. In her first two years at South Carolina, the Gamecocks had losing seasons. In fact, Ole Miss won three SEC games to South Carolina’s two in both of their first seasons. Staley has been there, and she’s seen enough in someone she considers a friend in McPhee-McCuin

“I’m like the little sister to all these coaches. They’ve all seen me win. All of a sudden, I didn’t just forget how to coach. But you cant shoot a gun if you don’t have bullets in it. I’m shooting hard right now, but blanks are coming out,” McPhee-McCuin said. “This isn’t easy for me. I’m a winner. I’m a competitor. But tomorrow, I’m going to be up and at it, you’ll see it on twitter. We’re going to go recruit and continue to build and continue to work. Right now I have to lead by example and that’s what we’re going to do.”

That competitor in McPhee-McCuin hates those games like the South Carolina game, scoring just two points in the entire first half.

But the Rebels are getting reinforcements. Ole Miss’ 2020 recruiting class, to this point, ranks atop the SEC. She’s signed the nation’s No. 13 overall player, Madison Scott, out of Maryland. Scott, a 6-foot-1 wing, is actually the first McDonald’s All-American recruit in the history of the Ole Miss women’s program. In addition to Scott is another five-star recruit coming in next year in Jacorriah Bracey, the nation’s No. 49 overall ranked player.

Adding those two, plus a few others in the 2020 class, to a group the Rebels currently have including some players redshirting while transferring and a talented big who tore her ACL months ago in Sarah Dumitrescu, and that breeds the optimism other coaches see.

“When coaches say things like that, they’re not talking about my current squad. They’re talking about the four in sweats at the end of the bench,”McPhee-McCuin said. “Honestly, if they weren’t there, I don’t know if I would’ve made it through the whole game tonight. They’re talking about that – you can’t win games without players. And they have a lot of them, but we have players that are coming in. That’s no shade to our current kids, right now it’s just tough.”

The Rebel coach jokes that this period has made her a historian of rebuilds. Crowds in the Pavilion have been dismal, but she’s quick to credit the fans that come for staying the whole time. Right now, as ugly as things are, it’s really just all eyes on the future inside the Ole Miss program.

Anthony Servideo, back at shortstop, stepping into Rebel leadership role

Anthony Servideo has never really had to be in his newfound role for Ole Miss baseball. With the exception of... read more