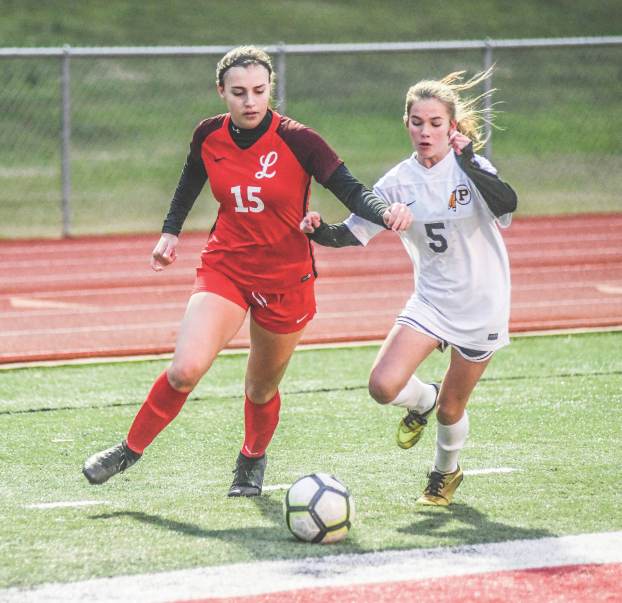 Lafayette sophomore Hudson Lindsay started nearly every game as a freshman on the 2019 State Championship team.

She scored nine goals that year, adding seven assists, all as a freshman. This year, she’s taken yet another step forward.

“The main thing that I’ve seen, other than physicality, is that she’s taller, faster, stronger,” said Lafayette head coach Melinda Scruggs. “But also, her confidence has taken a big step forward. She can get down on herself just like any high schooler, but generally she’s a lot more confident. She’s been okay with us putting important things on her back and us asking her to go score.”

Lindsay played varsity soccer as an eighth grader, but she sat the bench and played sparingly late in blowouts.

Now a sophomore, she leads the 18-4-1 Lady Commodores in goals by a wide margin, scoring 21 thus far on the season. But still, her mind often goes back to that miracle freshman season, getting to experience so much and so many wins as a young freshman thrust in to a starting role.

“Last year, starting as a ninth grader and getting all that playing time was kind of a little bit scary,” Lindsay said. “The seniors last year knew I was anxious and nervous to play, but they never doubted me and they always had my back. At the same time, they kind of told me they expected a lot of me, but knew that I could accomplish that.”

Her role this season is a little different.

More of a midfielder a season ago, she plays more pure striker this year. She’ll still drop back into that attacking midfield role from time to time, a perfectly suited role for someone capable of both scoring from range and winning one-on-one situations.

Lindsay agreed with her coach’s assessment that she’s more confident on the field. She thinks less, she said, and is less worried about screwing up. In her eyes, she said, much of that confidence just comes from having played many minutes with the other girls on the Lafayette team.

“The confidence comes not just from being older, but I’ve been playing with a lot of these girls for a really long time,” Lindsay said. “Just knowing how they play and getting more used to each other has contributed to that confidence a lot.”

In Lafayette’s first playoff game on Tuesday, a 3-0 shutout of Grenada on the road, Lindsay’s growth shined. Against a Grenada team that hadn’t allowed a goal in over a month, Lindsay herself notched two of them in the first half of play alone.

Coming off a 2019 season that ended in the team’s first 5A State Championship, the vibe with the team is different right now. They’re looser. Last year, they were just playing to see how far they could go. Now, they know what it feels like to be on top and they’re playing with a target on their backs. Yet, there’s no real pressure in their eyes.

“The cool part is that they’ve gotten a taste of that championship,” Scruggs said. “Now, they want to continue and they don’t want to settle for anything less than their best. And I’ve told them that even if it’s not a state championship, as long as they go out and leave it all on the field, that’s okay. They treat each other like a big family and they trust each other. All of that has correlated onto the field.”

With eight teams remaining in the playoff, Lindsay and the Lady Commodores will face off against Ridgeland on Friday at 5:30 p.m. at Lafayette with a berth in the North-Half final on the line.

Records are meant to be broken. Some just shouldn’t be. Hosting No. 1 South Carolina on Thursday night, the Ole... read more