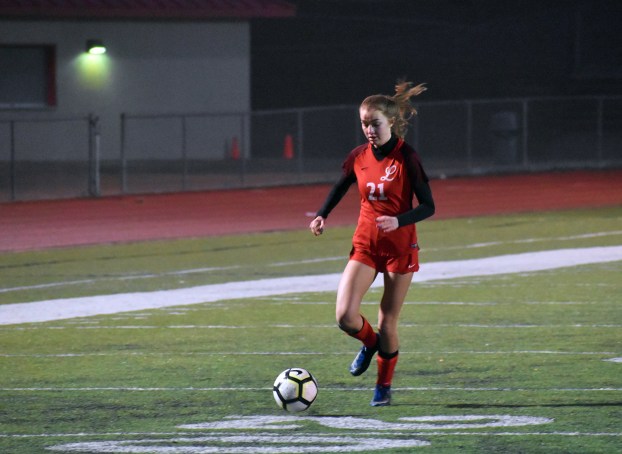 Lafayette's Lucy Wilson advances the ball up in the team's playoff game against Ridgeland on January 31, 2020 (Photo by Nathanael Gabler)

The Lady Commodores started a little slow on Friday night in the second round of the MHSAA 5A State Playoffs, but in the end they’re still alive to defend their 5A crown.

Behind two goals from junior Katelin Johnson, Lafayette shut down Ridgeland 2-0 to advance to the North-half final.

“We’re really coming together at the right time,” said head coach Melinda Scruggs. “We’re attacking, possessing the ball and being more risky with the attack. We’re putting it together and tonight was an example of that.”

It took nearly an entire half to one of the squads to draw first blood. After an opening 38 minutes of play went back-and-forth in a frame possession controlled by the Commodores, Lafayette finally converted on an opportunity. The Lady Commodores had a handful of chances in the box early. None of those opportunities landed. It took a chance from outside the box to take the first shot of the game.

After drawing a touch foul on the left side of the field, Lafayette approached a free kick from about 25 yards out of the goal. Instead of going for the header, Katelin Johnson went straight for the net, ripping a strike to the top-left corner of the goal over the outstretched arms of the Ridgeland goalkeeper. In the waning minutes of a scoreless half, the free kick took the Lady Commodores to half with a lead.

“That shot was huge,” Scruggs said. “Katelin has been working on those set pieces, those free kicks similar to that one all year. It’s made a difference in a ton of game. I’m super proud of her.”

Like the first half, the second frame started slow. Also like the first half, the Lady Commodores looked to Katelin Johnson to open the scoring. Taking a ball up the right side, Johnson appeared to have been crossing the ball back to the center of the field in front of the net. Instead, the shot found the far side of the net after being lofted perfectly over the Titan keeper. Johnson put Lafayette on the board and then she game them their breathing room.

“Probably two of the best goals I’ve scored,” Johnson said. “On the free kick, I had a second chance at it. Earlier, I had a similar one and missed far side. Coaches told me to put that one front post and it worked.”

The Commodores had their chances to add on the the lead down the stretch, but in the end the 2-0 margin of victory is all they needed to advance.

With the win, the Commodores advance to the MHSAA 5A North-half final final for the second consecutive season. They will face the winner of Saltillo and Neshoba Central on Tuesday in the North-half final.

“Coach Yo is going to turn this program around”: Why SEC coaches believe in McPhee-McCuin

It’s been ugly at times this year. On the surface, there hasn’t been much optimism or much to be excited... read more