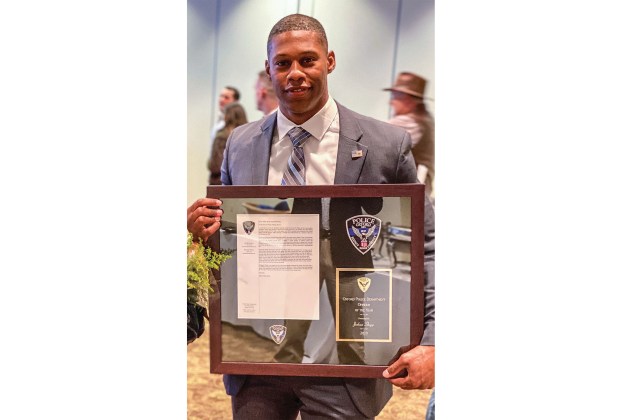 Shipp said he looked up to Parker, who is the only person to win the Officer of the Year award twice, and viewed his colleague as the standard to which he wanted to measure up. One year later, that decision paid off with Shipp being named the 2020 Officer of the Year for the Oxford Police Department.

The award was handed out during OPD’s annual awards banquet on Jan. 17.

“Knowing the people who got it in the past, it was people I looked up to,” Shipp said. “When I first came to OPD, (Parker) was very sharp and he was honestly the guy where I said, ‘Hey, I want to be like him.’ If I’m going to work to be like somebody, it’s going to be him. Just seeing the caliber of people that have gotten it before me, I know the quality of work that went in to get it.”

Prior to joining OPD in 2013, Shipp worked for two years for the University Police Department at the University of Mississippi. In 2015, Shipp left OPD to work for the Secret Service uniform division in Washington, D.C., where he was assigned to the Vice President’s quarters protecting then-Vice President Joe Biden. He returned to Oxford a year and a half later.

“He’s just worked his way through the ranks and is just a positive, motivated officer,” OPD chief Jeff McCutchen said of Shipp. “Does a good job and is very professional. … He leads by example. When you look for the qualities of a law enforcement officer, he’s at the peak of all of them. Honest, integrity, works hard and has a good attitude. He does a lot of things; big advocate in community engagement.”

Having that dual experience of working for both UPD and OPD, Shipp has developed a good feel for the unique dynamic that Oxford has with a university inside its city limits. Though, in the nine years since he left UPD and shifted to patrolling, much has changed in Oxford.

“UPD was different. I was just getting into law enforcement, so it was a little bit slower pace,” Shipp said. “They kind of dealt with a lot of the same stuff that we do here at OPD, but it was a slower pace. It gave me more time to get acclimated and learn. Honestly, it kind of taught me the politics of policing and dealing with people, and how it works in a college town. When I swapped over to OPD I was kind of exposed to the majority of everything. It was just a lot more frequent and a faster pace.”