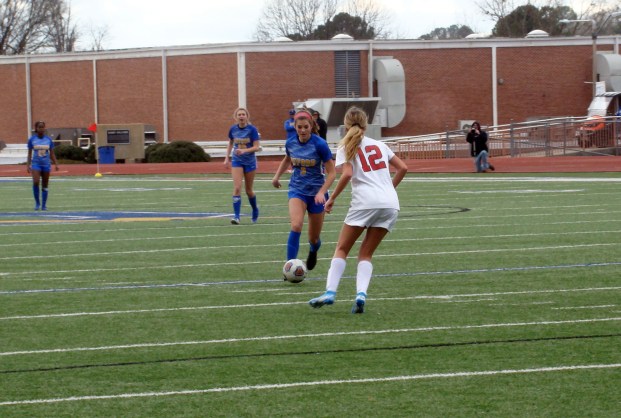 Oxford was less than 120 seconds away from reaching their first North Half championship game since 2017 and first in Class 6A.

All the Lady Chargers had to do was keep Clinton from finding a last-minute goal to tie up the match and send it to over, but a ball found its way into the net after goalkeeper Mary Anna Fulton landed on it to send the 6A quarterfinal matchup into overtime.

From there, Clinton held onto the momentum gained and defeated Oxford 4-3 in overtime to advance to Tuesday’s 6A North Half Championship against Tupelo. The Lady Chargers’ season ended with a record of 15-3-2.

“I thought we played hard,” said Oxford girls’ head coach Hunter Crane. “I felt like we had them there in the second half, especially when we went up a goal with 10 minutes left. They’d set back the whole game and kind of let us control it. In the second half we came out and had opportunities and put a big one in the net to take the 2-1 lead.”

After losing their lead late in regulation, it seemed the Lady Chargers regained the lead in the opening minutes of the first overtime period. Clinton goalkeeper Mckenzie Peacock snagged the ball off of an Oxford free kick attempt and it appeared to be caught in the net, yet no goal was called.

Clinton responded with a quick goal by Tailynn Remmel in the third minute of overtime to give the Lady Arrows (16-2-2) their first lead of the match. Two minutes later, Clinton capitalized when Fulton and a Chargers defender collided in the goalie box and scored to double their lead.

Carissa Strumm gave the Lady Chargers a pulse with her 21st goal of the season, but they could not manage any more offense the rest of the match.

“We fought back, gave ourselves an opportunity there again,” Crane said. “Nice thing about this team is they were never out of it.”

Grace Freeman got the scoring started with a goal in the 13th minute and freshman Parker Martin scored her goal in the 79th minute to give Oxford the 2-1 advantage at the time.

The Oxford boys’ team was also trying to clinch a berth to their first Class 6A North Half championship, but had to get past a Madison Central team that had not lost all season.

Madison Central made the task even more difficult by jumping out to a two-goal advantage at halftime and eliminated Oxford with a 3-1 victory. The Jaguars (19-0-2) advance to the semifinal round and will face Tupelo on Tuesday while Oxford’s season ends with a record of 12-6-2.

“(Madison Central is) super disciplined. They are well-coached, and we knew their set pieces were going to be fine-tuned and we saw that,” said Oxford boys’ coach Charles Sabatier. “I think that nobody really expected this team to do much, and I’m proud of making it to the second round for the first time in 6A. Proud of these seniors; they left it all out on that field. Proud of the effort.”

Junior Jordan Jones put the Jaguars up with a goal in the 24th minute and followed up by sophomore Regal Perry’s goal in the 38th minute for the 2-0 lead at intermission. Madison Central added their final goal of the match three minutes into the second half thanks to sophomore Jackson Travis.

Stone Tosh provided the Chargers’ only goal of the match, with an answer to Travis’ goal two minutes later.

Rebel offense stagnant in drubbing at No. 22 LSU

Falling down as many as 24 points in the first half on the road against No. 22 LSU, Ole Miss... read more