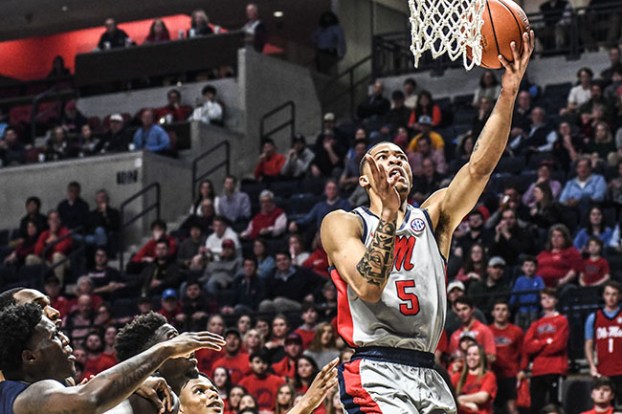 Rebels emphasizing winning close games as they travel to LSU

You can affect the game when the ball is not in their hands.

That simple, yet oft forgotten, aspect of a basketball game has been a big part of the message Kermit Davis has been give to his players of late.

Simply put, the Rebels have been struggling to win close basketball games. Ole Miss is a lowly 1-6 in SEC play, but they’ve been in so many of these games. The last three games Ole Miss has played at The Pavilion, they’ve lost by a combined total of nine points.

“Honestly, I don’t know (why). We just can’t finish games. It’s that simple,” said sophomore forward KJ Buffen. “It’s been an emphasis, trying to finish games. But we’re not going to change up who we are. We need to know how to finish games, but we’re going to stay the same and keep going hard.”

The coaches seem to know why. As mentioned, they’re emphasizing the little things. Obviously, the team has to hit shots down the stretch. But if the little things, such as playing when you don’t have the ball come together at the right time, the coaches believe they’re right there to tun things around.

An interesting factor going into this weekend, is the team they’re playing has been the exact opposite team to Ole Miss at this point.

“Our team is playing well enough to win at times. But we have to do some physical, basketball IQ things at the end of games to win,” Davis said. “That’s what LSU has done. They go get timely rebounds, they get second shots and they get steals when they need it. That’s what gets them over the hump to win all these close games.”

Will Wade: “You have to beat the computers.”

A rant on why he wasn’t happy with six straight one possession wins and the predictive models of the NET. pic.twitter.com/LzhvPMbyJR

LSU sits atop the SEC currently at 7-0. Where Ole Miss is struggling tremendously to close out games, LSU has been dominant in those close games. Of the last seven games for the Tigers, six have been won by a margin of four or fewer, including an 80-76 win over Ole Miss.

The Rebels can’t figure out how to win tight games, but that’s all LSU seems to do. And it’s almost to their detriment. The Tigers have not lost an SEC game and are 16-4 overall, yet they’re ranked just No. 19 nationally in the NET. The computers favor big wins of 5 points or more, something that triggered a semi-rant from LSU head coach Will Wade about ‘beating the computers.’

Really, he just meant they needed to get away from winning those close games. Right now, this Ole Miss team would do anything to win those close games, yet alone beating the computers. Their next chance at just that happens this Saturday at 11 a.m. in Baton Rouge.

The Lady Commodores started a little slow on Friday night in the second round of the MHSAA 5A State Playoffs,... read more