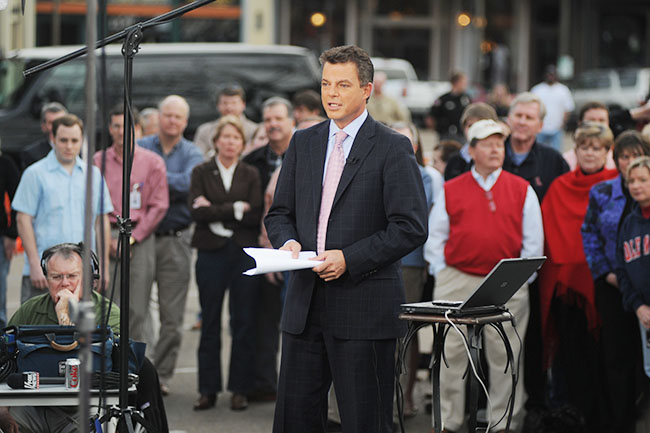 Fox news anchor Shepard Smith broadcasts from the Square in Oxford, Miss. in 2008. The School of Journalism and New Media announced on Thursday that Smith is the 2020 Silver Em award recipient. (Bruce Newman, Oxford Eagle)

Shepard Smith will be honored this spring for his efforts in the field of broadcast journalism.

The University of Mississippi announced on Thursday the former Fox News anchor will receive the Silver Em award during a ceremony in April. The award, which dates back to 1958, is given to Mississippians who have notable journalism careers or journalists who had notable careers in Mississippi.

“Shepard Smith embodies what a journalist should be — for decades, he has reported the news without fear or favor,” said Debora Wenger, assistant dean for innovation and external partnerships and professor of journalism. “Because he got his start in journalism here at the University of Mississippi, we feel extraordinarily proud of all he has accomplished. With this award, we hope to let him know how much he matters to our school and to a profession that many of us consider the foundation of our democracy.”

A native of Holly Springs, Smith spent more than 20 years as an anchor at Fox News. Before leaving the network last Fall, Smith was the host of “Shepard Smith Reporting.” Smith was a journalism major at Ole Miss but left during his senior year to accept a job at a local news station in Panama City, Florida in 1986. He joined the Fox News Channel at its inception in 1996.

A week after resigning at Fox News, Smith spoke to a group of journalism students at Ole Miss in October in what was his first public appearance since leaving the national news network. Smith answered questions as well as providing career advice to those who were close to beginning their careers in journalism.

“There’s no mistake you can’t undo,” Smith said. “You can correct every single mistake. You can stand up and be a human being about it and admit to those who count on you that you screwed it up. And you have to do the correction with the same fervor and emphasis that you made the mistake. Then you’re good.”

On March 31, Smith will take part in a discussion with Charles Overby and Curtis Wilkie as part of the Overby Center’s spring series of conversations at 5:30 p.m. in the Overby Auditorium.