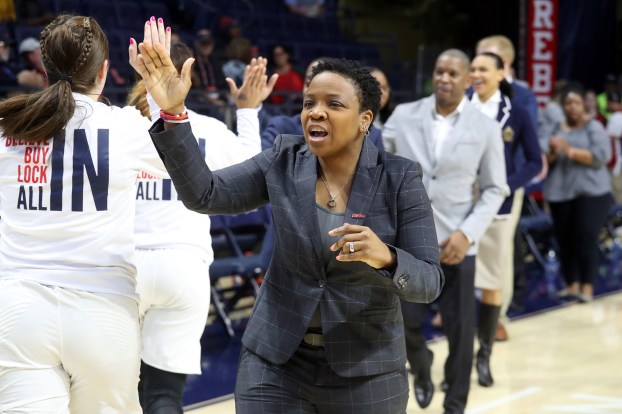 Rebels Come Up Short in Nail-Biter Against Alabama

The Ole Miss women’s basketball team put together a strong team effort in a wild game that featured 18 lead changes, but Alabama was able to edge out a 57-56 win thanks to a late fourth quarter run at The Pavilion on Sunday afternoon.

The Crimson Tide (13-9, 3-6 SEC) started the game 0-13 from beyond the arc, but they were able to find their stride at just the right time, hitting three trifectas in a row to erase what had been the largest Ole Miss lead of the game. The Rebels to that point had played a complete game, turning 16 Alabama turnovers into 18 points and shooting 40.7 percent overall and 56.3 percent from three on an SEC season-high nine three-pointers. However, the Tide were able to remain in the ballgame thanks to a significant 17-9 advantage on the offensive glass that translated to 24 second-chance points, as well as a 14-of-17 clip from the charity stripe compared to a 3-of-3 line for the Rebels.

“Great game. Tough loss. Just incredibly proud of my group,” said Ole Miss head coach Yolett McPhee-McCuin. “After the loss that we had last game (vs. No. 1 South Carolina), the whole program, myself included, we were in a really down place. Today I just talked to them about life. Adversity is going to hit and you have to be able to respond.”

Ole Miss (7-15, 0-9 SEC) responded right out of the gate, going toe-to-toe with the Tide during a first half in which the Rebels shot 50 percent and recorded eight of its 10 steals, with the contest knotted up 30-30 at the break. The Rebels put together an excellent third quarter coming out of halftime, winning 18-12 to take a 48-42 lead after stifling the Crimson Tide offense to 25 percent shooting while Ole Miss went 3-of-4 from beyond the arc.

The Rebels kept the pedal down in the early stages of the fourth quarter, extending to its largest lead of the game with 9:04 to play after Torri Lewis (six points, one rebound, one assist, one steal) nailed her second three of the game to give Ole Miss a 51-44 lead. It was at this point, however, that the Alabama offense rose to the occasion in a big way. Jasmine Walker (eight points, three rebounds, two steals, one assist, one block) hit the first of three consecutive threes for the Tide to spark what ended up as a 13-3 run to erase the Rebel lead.

Ole Miss was able to retake the lead after the fourth three of the day by freshman Jayla Alexander (15 points, five rebounds, four assists, two steals) gave the Rebels a 54-53 lead with 5:38 to play. It was short-lived, though, as Alabama took it right back for good with an Ariyah Copeland (11 points, five rebounds, two blocks) layup at 4:57.

Rebel sophomore Iyanla Kitchens (two points, six rebounds, two steals, one assist) was able to cut the Tide lead to one at 1:44 to play at 57-56. However, Ole Miss was unable to convert on each of its two possessions in the final stretch, with a drawn-up play for Alexander rendered inert by an offensive foul called on Deja Cage (15 points, five rebounds, three assists) and a last-second, full-court heave coming up short as time expired.

“We wanted Deja (Cage) to drive and get to the paint because we felt like everybody would have collapsed,” McPhee-McCuin said. “Jayla (Alexander) was coming around to get it. I wanted us to force a rotation with the drive. It’s just unfortunate because I think we could have made something happen from it.”

Cage was one of two Rebels with 15 points on Sunday alongside Alexander. Combined, the duo scored 30 points and were 7-of-11 from three (Ole Miss was 9-of-16 overall). For Cage, this marked her 15th double-digit game of the season and her 14th with multiple threes. Lewis also hit multiple treys on the day, her 31st career game in which she has done so.

The Rebels also received a career outing from junior Tootie Rankin, who was starting for the second time in her career after transitioning from working as a student manager earlier this season. Rankin scored a career-high eight points and also had two steals and a block in the effort.

“(Tootie) has just been a breath of fresh air,” McPhee-McCuin said. “When I talk about the type of people from a character standpoint that I want in this program, you’re looking at her right there. Someone that is grateful for the opportunity, gives 100 percent, 100 percent of the time every single day. She loves competing, she wants to be in the moment, and that’s the future. This year, when you talk about foundation, that’s the characteristic that we want.”

Ole Miss will be off this Thursday before hitting the road for Vanderbilt next Sunday (Feb. 9) for a tilt on SEC Network, with tipoff set for 4 p.m. CT.

Oxford was less than 120 seconds away from reaching their first North Half championship game since 2017 and first in... read more