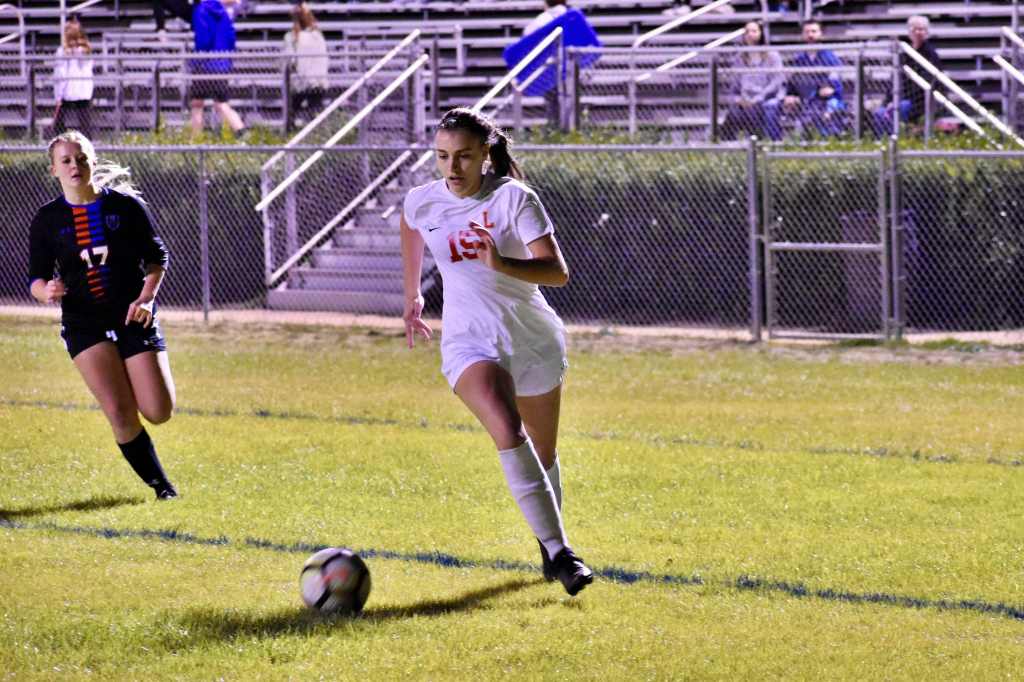 Lafayette sophomore Hudson Lindsay drives the ball late in the first half against Saltillo in the North-Half final on February 3, 2020 (Photo by Nathanael Gabler)

SALTILLO – The Lafayette Lady Commodores took a lead to the half, but quickly found themselves trailing on the road at Saltillo with under 20 minutes to play on Tuesday night.

Scoring late and netting two in overtime, the Lady Commodores beat Saltillo 4-2 in overtime of the North Half final to advance to their second straight MHSAA 5A State Championship game.

“Tonight, Saltillo showed up,” said Lafayette coach Melinda Scruggs. “This team has a lot more character than I gave them credit for, that’s for sure. They dug down deep tonight and decided they didn’t want to go out just yet.”

Early in the game, the Lady Commodores had numerous chances deep in the Saltillo box. They were unable to convert those chances. The breakthrough in the game came on a play far from the Tigers goal. Lafayette lofted a long pass to the top of the field to sophomore Hudson Lindsay. Tipping the ball high to herself, Lindsay dribbled the ball past the Saltillo keeper, netting the game’s first goal 20 minutes into the contest.

The Lady Tigers had their chances late in the half, a few really well played balls in to the box, but Lafayette goal keeper Caitlyn Rhea made a pair of good saves to keep Saltillo scoreless through the opening 40 minutes of play.

Despite their chances late in the first half, the Saltillo girls were far from done. A back-and-forth opening 15 minutes of play in the second half resulted in very few chances for either team and a lot of play in the middle of the field. However, the Lady Tigers converted when they got their shot and the game changed in a hurry.

In the 62nd minute, Saltillo sophomore Abby Covington ended up right in front of the Commodore net off of a throw in. Covington converted the easy tap-in to tie the game with just over 20 minutes to play. No less than three minutes later, the Tigers struck again to completely flip the script. Another ball very deep into the Commodore half ended up at the feet of Tiger forward Caitlyn Carnathan, another tap-in goal this one to take a 2-1 lead with 19 minutes to play.

“We were down, which was a little nerve wracking,” Lindsay said. “But we still had 20 minutes left. Coach kept telling us to keep pushing, keep pushing  and that’s what we did. And we were able to tie it up and send it to overtime. That was pretty exceptional of us.”

Hudson Lindsay, injured in Friday night’s win over Ridgeland, had an answer of her own. Taking a ball up the left side, Lindsay took on three Tiger defenders on her own, a stop, hesitation and go before beating the Saltillo keeper to the back of the net. With nine minutes to play, the game was tied yet again.

“I was telling myself ‘keep your composure. Keep your composure,” Lindsay said. “It was just so scary. I had so many defenders coming and I’m thinking how I can’t miss. It was a lot of pressure but keeping the composure was the key.”

Lafayette’s Katelin Johnson, the hero quarterfinal game, had a chance on a free kick to end regulation, but the Tiger keeper made quite a save to send the game to overtime.

In overtime, Julia Perkins had a moment to shine. Blocking a clear by a Tiger defender going up the right side of the box, Perkins sent a cross that landed in the perfect place, right at the feet of Lindsay. She had missed on a handful of great opportunities earlier in the first overtime period, but wouldn’t miss her chance on this one.

Lindsay found the back of the net on the Perkins cross to give Lafayette a 3-2 lead in overtime. Just two minutes later, it was Lillie Grace McCutchen lofting a beautiful shot from outside the left box for the insurance goal. Lafayette went into the second overtime period with a comfortable two-goal lead and didn’t look back, winning by that 4-2 margin.

The Lafayette Lady Commodores are still alive, and are now just one game away from repeating as MHSAA 5A State Champions. They will play the winner of Long Beach and East Central on Saturday at 4 p.m. from Brandon High School.