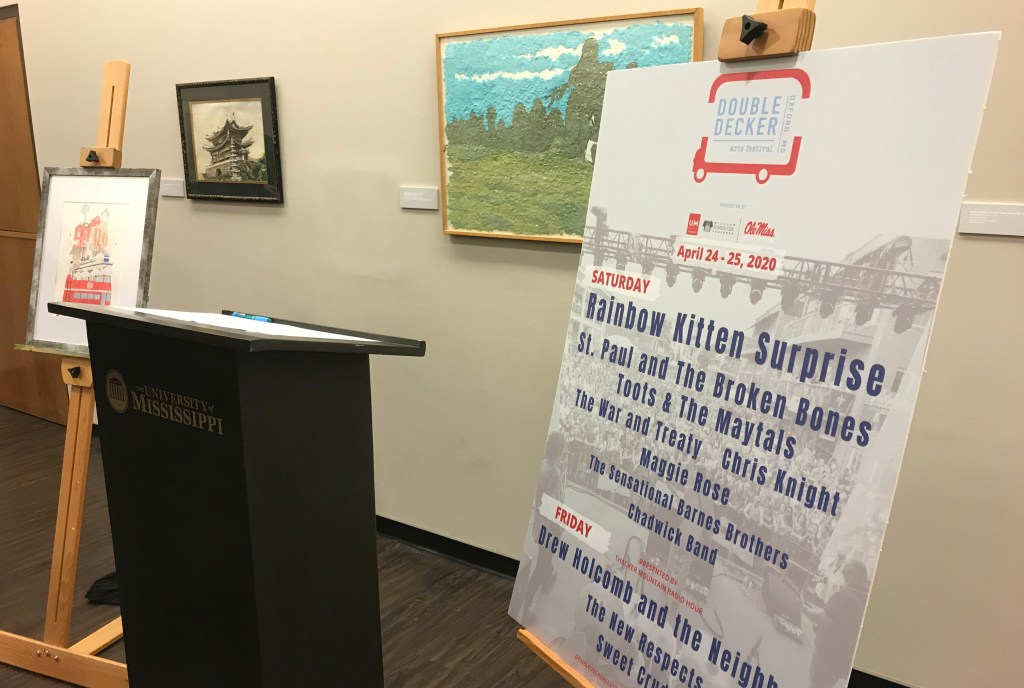 The music line up and official poster for the 2020 Double Decker Arts Festival was announced during a press conference at the University of Mississippi Museum on Tuesday, February 4, 2020. (Jake Thompson/Oxford Eagle)

To commemorate the 25th anniversary of the Double Decker Arts Festival, there are some old faces returning to the main stage this April.

Visit Oxford revealed this year’s music lineup during its press conference on Tuesday at the University of Mississippi Museum. The 2020 Double Decker Arts Festival will run April 24 and 25.

Alternative rock indie band Rainbow Kitten Surprise headlines the 2020 festival on Saturday with St. Paul and The Broken Bones, Toots & The Maytals, The War and Treaty also playing during the afternoon session.

Rainbow Kitten Surprise hails from Boone, N.C. and has released four albums since debuting in 2013. Their most recent release “Mary (B Sides)” came out May 2019.

St. Paul and The Broken Bones are returning to Oxford after playing at Double Decker in 2015. Debuting in 2012, the Southern soul band out of Birmingham, Ala. has recorded three albums with the most recent effort, “Young Sick Camelia,” released in September 2018.

Saturday’s musical entertainment will begin at 10:15 a.m. on the main stage with Chadwick Band. The Sensational Barnes Brothers (11:30 a.m.), Maggie Rose (1 p.m.) and Chris Knight (2:30 p.m.) round out the morning session before The War and Treaty kick off the afternoon lineup at 4 p.m. Toots & The Maytals will take the stage at 5:30 p.m. followed by St. Paul and The Broken Bones at 7 p.m. and Rainbow Kitten Surprise closing out the festival at 8:30 p.m.

Double Decker began in 1994 by Oxford mayor Robyn Tannehill. The first festival featured two truck trailers serving as the stages and had 9,000 people attend. The 2019 edition of the festival attracted nearly 70,000 people.

“Double Decker is like Christmas morning to me,” Tannehill said. “It’s so fun to look back and see how this community embraced this festival. What Oxford did best then, and what I think we still do best now, is celebrate music, food and art and those are at the core of what has made our community a great place to live.”

The annual two-day festival will officially kick off on Friday with the Thacker Mountain Radio Hour closing out their spring season. Prior to Thacker Mountain taking the stage at 6 p.m., Sweet Crude will play at 5:30 p.m. New Respects will play at 7:45 p.m. followed by Drew Holcomb and The Neighbors at 9 p.m.

It will mark the second time Drew Holcomb has played in Oxford in the last six months. He brought his Dragons Tour to the Ford Center on Oct. 28.

The official artwork for the festival was revealed during Tuesday’s press conference. Hannah McCormick was selected as the official artist to design the poster, which featured Oxford’s iconic Double Decker bus with famous building facades on the Downtown Square rising above it.

In the lower left corner of the poster, McCormick honored another Oxford icon by painting Ron “Ronzo” Shapiro looking up at the bus. Shapiro passed away in August after succumbing to his battle with cancer.

“(Shapiro’s death) was felt by a lot of in the community, especially by people here in this room, who knew Ron,” McCormick said. “It seemed like a good time to include him in this year’s artwork.”

Other events taking place include the 25th Annual Double Decker Spring Run. This year’s races will feature a new route for runners taking part in both the 5K and 10K events. The new route will go away from the Square and take runners north from the starting location at the YMCA on North Lamar Boulevard. Organizers are expecting 1,800 runners to participate in this year’s races.