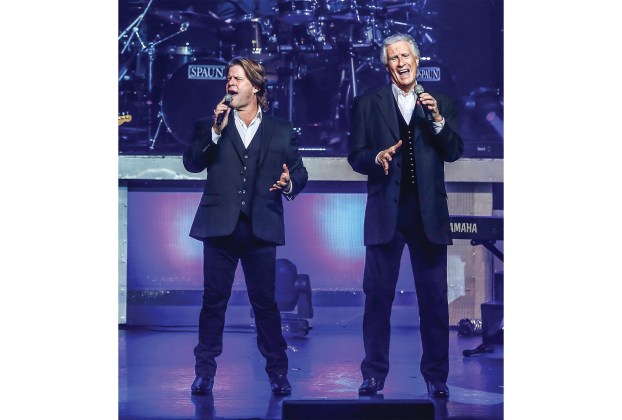 Bucky Heard, left, and Bill Medley, right, make up The Righteous Brothers who will perform at the Gertrude C. Ford Center on Saturday, Feb. 8, 2020.

When Bobby Hatfield died in 2003, Bill Medley had zero thoughts of resurrecting the Righteous Brothers without his longtime partner – that was until Medley listened to Bucky Heard singing covers of Journey songs.

The two had already known each other for 16 years, but in 2016 Medley made Heard an offer to bring back one of the best duo groups in history.

The pair will bring their show to the Gertrude C. Ford Center on Feb. 8.

“It’s been quite remarkable, actually,” Medley said of the four years since. “Bucky Heard just fit in so beautifully on just a whole bunch of different levels. He’s a great, great singer. … I just knew that I liked him a lot and I knew he was a hard-working man; good family man, and so it just fell together perfectly.”

There are times during performances where Heard will do certain things and make Medley’s “heart jump,” and take him back to the days when Hatfield was standing by his side.

“I never intended on putting the Righteous Brothers back together,” Medley said. “If it wasn’t for Bucky, it would never happen. I wouldn’t have done it. Even though there are some good reasons to put it back together because of the music. These people, they’re showing up, and I know that they’re showing up not to see me, but to hear that music.”

Medley and Hatfield formed the Righteous Brothers in 1963. They came up with the name, according to Medley, after black marines from the El Toro Marine base in Orange County, Calif. started calling them “righteous brothers.” At the end of one performance, a black U.S. Marine in the audience would shout “That was righteous, brothers!” and would greet them with, “Hey righteous brothers, how you doin’?”

From 1963 to 1975, the duo recorded 14 albums and produced chart-topping and record-breaking hits such as “Unchained Melody” and “You’ve Lost that Loving Feeling,” which went on to become the most-played song on the radio.

Those songs were hits in their time, but it took nearly two decades for them etch their names in pop culture history, thanks to the success of movie soundtracks in the 1980s and 1990s. “Unchained Melody” was featured in the 1990 movie “Ghost” starring Patrick Swayze and Demi Moore, though nothing would touch the success of “Loving Feeling” after it was featured in the Tom Cruise blockbuster “Top Gun” in 1986.

The song was featured when Cruise and Anthony Edwards’ characters performed the iconic karaoke scene in “Top Gun,” when Cruise’ character, Maverick, was trying to impress Kelly McGillis’ character.

“We were back bigger than ever,” Medley said of their songs finding new life.

Now, 40 and 30 years later, those songs are still relevant. Between radio stations and bars, people can hear those songs being sung by a new generation in their cars and on the dance floors. Medley noted his manager gets requests “at least once a month” to allow “Time of My Life” to be featured in an upcoming commercial.

“We’ll get a lot of kids who come to the show say that, ‘My mom, dad, grandpa used to play your music around the house all the time and I just fell in love with it,'” Medley said. “Music today, about half of it anyway, is not about love anymore. It’s not about emotion, a lot of it. I think we’re losing the heart of it and I think when kids hear ‘Unchained Melody’ or ‘Loving Feeling,’ that’s in our DNA. That’s love and getting hurt or falling in love. That’s never going to go out of style and I’m not sure they’re making enough songs like that to for kids to grab a hold of.”

The songs even touched the younger generations of Medley’s family. His daughter, McKenna Medley, a singer in Nashville, will go on the road with him and sing Jennifer Warnes’ part on “Time of My Life.”

Tickets for the Righteous Brothers’ show on Saturday are still available and range from $50 to $80. They can be purchased through the University of Mississippi box office’s website or in person at the box office.

Shepard Smith will be honored this spring for his efforts in the field of broadcast journalism. The University of Mississippi... read more