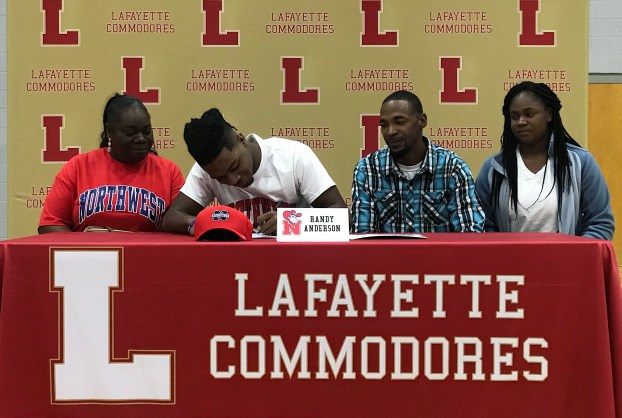 Lafayette High School is making a regular celebration out of having a large group of players decide to continue their football careers.

Seven players announced their selection for which teams they will be playing for this fall during a National Signing Day ceremony held at the Lafayette High School gym on Wednesday. Early December has become the key day for high school players to fax their national letter of intent, but the traditional first Wednesday in February remains an opportunity for players to hold off and think a little more on their decision.

“I think it’s the kind of culture that’s been created over several years here. Long before I got here,” said Lafayette head coach Michael Fair. “Good football is played here at Lafayette. … This group, because they had to grow up as sophomores, they just got kicked in the teeth. They never wavered. They never quit. They never said, ‘Hey, I don’t think this is for me,’ and they churned out 18 wins these last two years.”

Quarterback Randy Anderson, Dylan Christman and Austin Wilson will continue to be teammates as they signed with NWMCC and will be Rangers this fall. Anderson led the Commodores’ rushing attack with 1,802 yards and 21 touchdowns on 251 carries, while also passing for 579 yards and seven touchdowns.

“Randy is just so dynamic,” Fair said. “Where he signed, he was going to do the same where he goes. Northwest is getting a good one, there’s no doubt about that. We’re going to be keeping up with him for a long time.”

Defensive standouts Tabias Brown and Keaton Hunter-McIntosh will continue threatening offenses together at NEMCC. Brown finished with the fifth-most tackles for the Commodores last year with 61 while McIntosh recovered two fumbles. The pair will join defensive lineman Tavion Prather, who is already in Booneville as an early enrollee.

A group of 10 Oxford Chargers seniors will be continuing their athletic careers into their collegiate days. Oxford High held... read more