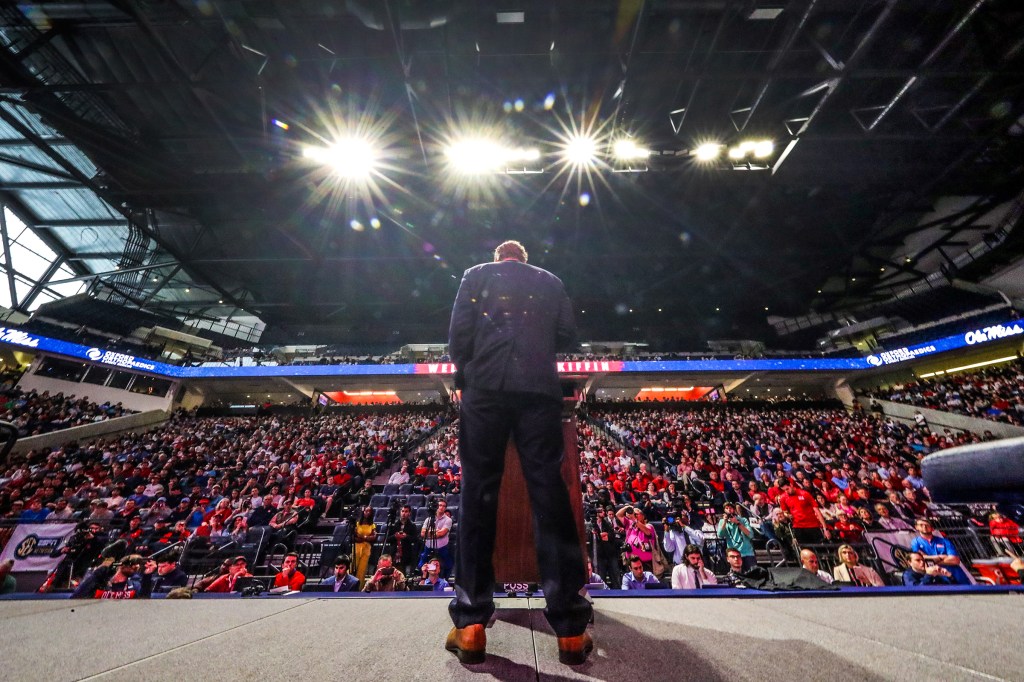 Lane Kiffin’s first recruiting class as the head coach at Ole Miss is in the books.

Ole Miss inked 18 players for the class of 2020, landing a class ranked No. 38 nationally and No. 12 in the Southeastern conference.

After signing 12 players in the December signing window, and adding another in January, Ole Miss got only three letters of intent on Wednesday’s signing day to bring the class to a close.

“The players are good in the class that we signed, it’s just not very deep,” Kiffin said. “You’ve got room to sign 25 or 27 players, so from that standpoint, obviously,  it’s not the same. But there’s really good players here.”

It was a big day for the offensive line in Oxford. Big bodies in the trenches seemed to be Kiffin’s focus in the weeks since the early singing window. Signing three offensive linemen in the early window, the Rebels added two more on Wednesday, including three-star Cedric Melton, who was not committed to Ole Miss prior to National Signing Day. Brady Ward, another three-star tackle from Alabama, did not sign but committed to Ole Miss to grayshirt.

Coming into the day, Ole Miss had three hard-committed players from whom they expected to receive national letters of intent. They only got two of the three. Four-star running back Henry Parrish, three-star defensive back Daran Branch and three-star offensive tackle Luke Shouse all came into the day committed to Ole Miss. Parrish and Shouse came through for the Rebels. Branch, who had been committed to Ole Miss since November, signed with the University of Georgia.

Parrish is the biggest name to sign with the Rebels on Wednesday. A four-star recruit, the running back from Miami, Fla. is the No. 18 overall running back in the class according to 247Sports.

“I think that’s a good problem to have. We got these guys coming in, that’s four running backs within twelve months of each other,” Kiffin said talking about the depth of his running back room. “We play really fast and we’re going to have a high play count. You can never have enough running back, and we’re excited to have these guys.

With Parrish’s signing, he joins Kentrell Bullock, a three-star running back who signed in December. Add that to Jerrion Ealy and Snoop Connor, who will be sophomores, and that’s quite the deep running back room.

Sitting atop the Rebel class by player rankings standards is four-star defensive end Demon Clowney, a cousin of former No. 1 overall NFL Draft selection Jadeveon Clowney. Committing to the Rebels after an official visit in mid-January, the nation’s No. 11 overall weak side defensive end recruit from Maryland is one of the eight to early enroll in the University.

“Some of our coaches were familiar with (Clowney) from recruiting him before. It was a quick turnaround when we got on him late,” Kiffin said. “He’s a good player and extremely talented. We’re happy to have him.”

In total, Clowney is one of three four-star recruits in the Ole Miss class of 2020 that ranks No. 38 nationally. Fourteen three-star players and two transfers – safety Otis Reese and tight end Kenny Yeboah – round out the class of 2020. All in all, it’s not the largest class for an Ole Miss staff that didn’t have a full cycle of recruiting. Kiffin stressed not reaching and signing kids that wouldn’t fit or that he didn’t have relationships with, but acknowledged it’s not a deep class or one that will be his best at Ole Miss.

“We lost some kids, obviously, like everybody does,” Kiffin said. “This is a good class with some really good players. But we’ll sign better classes each year we are here. We’ll sign more classes that fill more areas of need, but we just didn’t want to reach this year.”

Having not filled out the full 85 scholarships, Ole Miss leaves themselves with some flexibility moving forward for transfers or larger classes in the future.

Zachary Evans, a five-star running back and key target for the Rebels, did not announce his commitment on signing day. The former Georgia signee from December was released of his letter of intent from the Bulldogs and is choosing largely between Texas A&M, Tennessee and Ole Miss. However, Evans said he plans on taking more visits through March and seems nowhere near his decision. Another player the Rebels had their eye on but failed to land is that of Louisiana safety Donovan Kaufman. A Vanderbilt commit, Ole Miss had made a late push to attempt to flip Kaufman. He ended up sticking with the Commodores.

Of the 13 early signees, plus transfers, eight Rebels early enrolled in the University, beginning classes in January and practicing with the team throughout the spring. Those eight are specified below.