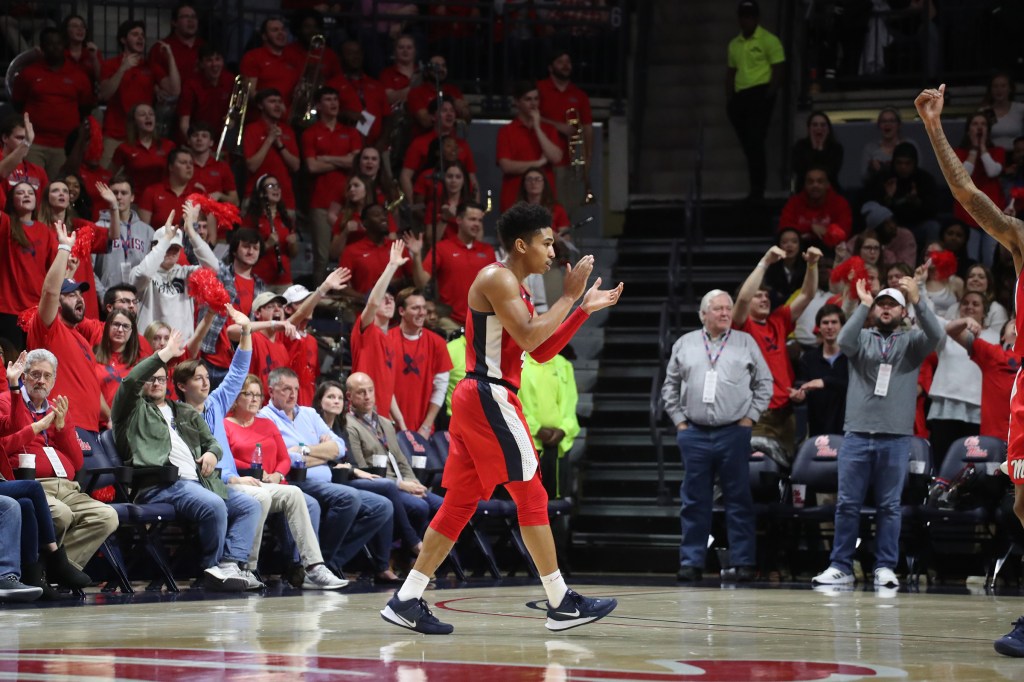 Ole Miss overcame their own demons on Wednesday night.

“I think tonight was one of our very best games of the entire year,” Davis said. “I told them a couple days ago ‘let’s just try to win February.’… Our team has some good basketball ahead of us. But it was a good feeling just to win an SEC home game.”

Through conference play and against power-5 teams, Ole Miss (11-11, 2-7 in the SEC) has been incredibly streaky. All too many times, this team has blown double-digit leads. At other times, they’ve gone on long runs of their own. Sometimes the streakiness has worked in their favor – see the 21-point comeback win against Penn State. However, for the most part, like in losses to Auburn, Florida and LSU at home, it’s been Ole Miss on the wrong side of run-to-lose games.

Things seemed like they could have gone the same way on Wednesday night in the Pavilion. Ole Miss jumped out to a quick 8-0 lead on South Carolina before allowing a 10-3 Gamecock run. Instead of folding, as this team has been prone to do, they went on a 10-2 run of their own. And instead of letting South Carolina back in the game, the Rebels held on, going to half 43-32.

It was in the second half where the Rebels exorcised their demons. The Gamecocks put together and 8-2 run early in the second half to cut the lead to one score, but Ole Miss bounced back. South Carolina put together another 7-0 run to cut the Ole Miss lead to 12 with 4:44 to play, but again, the Rebels found a way to bounce back, thanks to six points of their own from Breein Tyree.

In the end, Ole Miss would hang on to get their second SEC win by a final score 84-70.

“Basketball is a funny game, man. If a team gets rolling, a lot of times there’s not much you can do. Sometimes, you just have to credit those other teams,” Tyree said. “But tonight, we did a great job of keeping the lead the whole game and really just controlling the game.”

A big, yet surprising, development in the game was the play and usage of Antavion ‘Dude’ Collum, a 6-foot-7 true freshman from Memphis. Before Wednesday, the 22nd game of the Ole Miss season, Collum had appeared in only 15 games and was playing 7.6 minutes per game in those games in which he appeared. Against South Carolina, he played 12 minutes in the first half and 21 in the game. He finished with a +/- of +16.

In less-surprising fashion, Breein Tyree had another big offensive game for Ole Miss in this one. The Rebels’ leading scorer put up 38, a new career high. It’s Tyree’s third 30-point game of the season.

“We didn’t celebrate like we won the Super Bowl but it’s definitely a positive vibe in the locker room right now. Everyone loves to win and everybody hates to lose,” Tyree said. “It just shows you this team isn’t giving up. I’m glad to see there was a good showing from the fanbase. We’re still going to work as hard as we can and try to get as many wins as we can out of this season.”

Wednesday was Morgan Freeman night at The Pavilion, with the first 1,000 Rebel fans in the building receiving specialty Morgan Freeman Ole Miss bobblehead dolls. In attendance, the Hollywood icon and Ole Miss fan conducted the game’s pregame pump-up ceremony and was the center of many in-game promotions.

Kermit Davis didn’t want to talk too much about the individual achievement from the night, picking up his 500th career win as a head coach. He may not have wanted to make himself the center of attention, but it was clear what hitting the achievement and doing so in the state of Mississippi meant to him.

“Keith (Carter) congratulated me after the game, and I told him 500 is probably the sign of an old coach,” Davis joked. “I couldn’t have done it at a better place, in my whole life. I’ve coached in a lot of great places, but to be at home in Mississippi… it means a lot. To be able to coach at Ole Miss and do that, I just reflect on so many good players and great assistant coaches. I’ve had some wonderful wins and a lot of tough losses in that time too. It was a grind trying to get to 500, too, as you well know. So hopefully 501 doesn’t take as long.”

With the win, Ole Miss gets back to .500 on the season at 11-11 (2-7 in SEC play). Wednesday marking the first of a three-game home stand, with the team returning to the Pavilion on Saturday at 1 p.m. for a rematch with a Florida team that beat them 71-57 on the road in January.