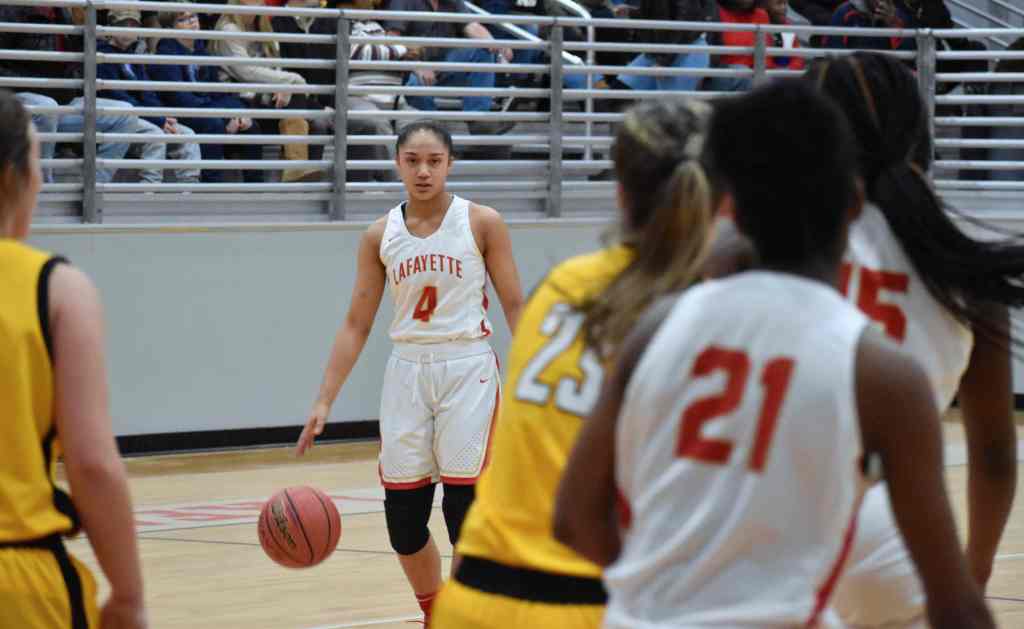 “They were a little more aggressive than we were tonight,” said Lafayette head coach Shayne Linzy. “But the teams we’re going to play from now on, whether we win or lose, not too many are going to be better than this Ripley team. … But we just got finished playing the two top teams in 4A to get us ready for the postseason. We’re battle tested.”

The first quarter started slowly but quickly became an up-and-down game. Ripley didn’t get on the board until the 4:45 mark of the first quarter, but brought the game all the way back to a 9-all tie midway through the opening frame. Behind a fast-paced transition game, the Commodores ended the quarter on a 6-0 run to go into the first quarter with a six-point lead.

After scoring a quick three-pointer to open the second quarter, the Commodore offense seemed to stall. The Tigers forced Lafayette into a more half-court set, holding the Commodores to a nine-point quarter with a stretch of over four scoreless minutes. Going into the half, Ripley had cut the Lafayette lead to just two points at a low-scoring 24-22.

The second half saw Lafayette and Ripley settle in to a much slower-paced, half-court game of basketball. In that, it was also by far the highest scoring period of the game. Both teams did a better job of getting to the free throw line, leading to a combined 25 points scored in the quarter. Despite all the points and the close games and ties, Ripley still had never led when the game went to the fourth quarter 36-35 in favor of Lafayette.

It didn’t take long for that fact to change. Making one of two free throws to open the fourth quarter, Ripley leading scorer Siarra Jackson gave the Tigers their first lead of the game with 7:19 left to play. Scoring only one bucket in the opening five minutes of the fourth quarter, Lafayette put themselves in a bit of a bind. However, a converted and-one play from senior Kimaya Dixon with 2:55 to play tied the game at 41 points.

“We were still kind of in it,” Linzy said. “But that stretch was a lot like the previous game against Pontotoc. We weren’t doing the little things that give us a chance to win. But all that said, we still had a chance to win.”

Ripley went on a bit of a run following the Dixon bucket, bringing a late lead to as many as six points. However, a late drive by Azaria Buford cut the lead to just one point, at 47-48 with 18 seconds remaining. After Ripley hit just one free throw on the other end, the Lady Commodores had their chance to tie at the free throw line with 5.7-seconds to play. This time, Buford hit just one of two free throws. Ripley would go on to win 51-48.

With the loss, Lafayette finishes the regular season at 18-5, 5-1 in Region 1-5A, winning Region 1-5A. It’s the third season in a row they’ve finished their regular seasons atop the region. Next up for the Commodores, the Region 1-5A tournament here in Oxford. The No. 1 seed, they’ll play Lake Cormorant on Tuesday at home.

Despite the outcome, Thursday still marked senior night for a group of five Lafayette girls. The group of Kimaya Dixon, Molly Jones, Yazmine Norphlet, Azaria Buford and Hailey Stupal certainly have a place in their coach’s memory.

“This is the senior group that were freshmen when we won state,” Linzy said. “Getting to see them grow up and mature, not just as basketball players but as young ladies, we’re going to miss them. I’m going to miss them dearly.”

Second half woes lead to Commodore boys’ loss to Ripley

On the boys side, the Lafayette team has struggled a lot this year. However, as the regular season’s come to a close, they’ve been playing quite well.

Over the opening months of the season, the Lafayette boys won just two games. Then, seemingly out of nowhere, they went on the road and beat one of the best teams in 4A, scoring 78 on the road to beat Pontotoc. On Thursday’s senior night, they lead a Ripley team that had lost only two games all year

The boys are certainly peaking at the right time.

“If there was any doubt in their minds that we can compete in some of the better teams, if they have any doubts, I think they’ve squashed them,” said head coach Brady Gray. “Some teams peak too early; some don’t peak at all. But I really do think we’re playing our best basketball right now.”

Falling down 12-6 in the early portions of the game, Lafayette rallied to take a 22-14 lead on the Tigers. The Commodores simply controlled a Ripley team that was riding a 19-game winning streak for the majority of the first half of play. It wasn’t until the final three seconds of play before Ripley retook the lead, going to halftime up 25-24.

But Ripley’s run continued, scoring ten unanswered to open the half and outscoring Lafayette 21-6 in the third quarter. Ripley would go on to win 63-46, yet the Commodore coach is still optimistic about how his team has been playing as the team prepares for next week’s regional tournament.