“Earned, Not Given”: the motto driving the Lafayette soccer state title run 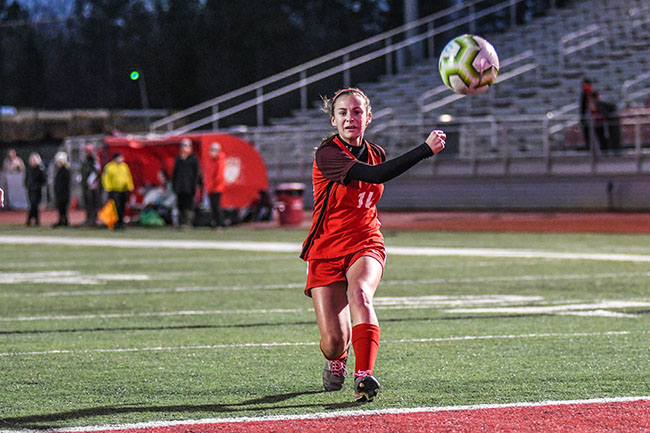 The Lafayette Lady Commodores may not even know it, but an old LeBron James moniker has been driving their playoff run this season.

A year ago this weekend, the Lady Commodores were in Brandon, knocking off Long Beach 5-1 to win the team’s first MHSAA 5A State Championship. This Saturday, they’ll be in the exact same position.

Going into the season, Lafayette coach Melinda Scruggs said she did her best to downplay it, but she knew this year would be a little different – the team was going to have a target on their backs. The girls still relatively cruised through the regular season, putting together a 20-4-1 record. Through the first two rounds of the playoffs, they didn’t allow a goal.

Then on Monday, with 19 minutes left in North Half final, the girls found themselves trailing 2-1 to Saltillo on the road. It caused them to pause, and dig a little bit into their back pockets to resurrect the theme that started the season.

“At the beginning of our year, we talked about ‘earning it,'” Scruggs said after that game on Monday. “We won it last year, and we thought this year might have been a little bit harder. Up until this point, we would say ‘yeah, earn it.’ Whatever. It didn’t mean anything until tonight. Tonight, Saltillo showed up. They were a fantastic team. But I just told them they had to earn it. And tonight they earned it, 100-percent.”

BIG S/O to Dr. Scarborough, THE University of Akron & all my Zips fam!! Dr.S has my back and I have his #UNLIMITED #IPROMISE #EARNEDNOTGIVEN

That was the catchphrase given to the girls from their coach at the start of the season. It’s one LeBron James used to tag just about every Instagram post he made. If it worked for James, there’s absolutely no reason it shouldn’t work for the Lady Commodores.

After falling behind, Lafayette scored three unanswered goals in the remainder of the North Half game at Saltillo. One sent the game to overtime. Early in the overtime period, they had numerous chances they weren’t able to convert. Then they scored two in a matter of minutes to send themselves to their back-to-back state appearance. They earned it.

“Our slogan this year is ‘Earned, Not Given.’ Coach Scruggs just kept reinforcing that throughout the game, the year,” said sophomore Hudson Lindsay, who scored three times in the win. “We just had to keep pushing, keep pushing. (In overtime), we just had to keep reminding ourselves the clock hadn’t run out. One of those was going to go in.”

Actually two went in, sending the Commodores back to Brandon with a 4-2 overtime win over a Saltillo team that they split regular season meetings with.

Now, the Lady Commodores are in the same place they were a year ago. This time, they’re the marked team. But also this time, they are 80 minutes away from their second-straight state title. The girls take on East Central at 4 p.m. Saturday in Brandon.