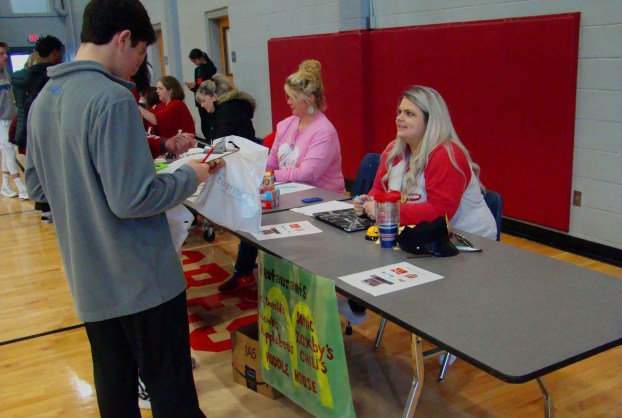 Freshmen at Lafayette High school got a dose of reality on Friday.

The yearly Reality Fair was held inside the LHS gym, which provides lessons on financial responsibility with a twist. Each year, ninth graders get to take part in the fair, which allows them to spend a predetermined salary on multiple items.

Much like life throws people curve balls or their bank account is hit with an unexpected penalty, the students are also hit with a penalty based on the amount of absences. Each student is hit with a $25 deduction for each absence after their first three recorded absences.

“They come (to the fair) during their World History class, and they come through each group to kind of see what it’s like to be in the real world and spend money and budget,” said LHS counselor Brandy Baker. “We’re trying to make it as realistic as we can for them to remind them how important education is and to work hard and to get a good job to be able to budget your money and do what you’re supposed to do.”

A wheel of chance allowed students a chance to possibly earn a $50 credit toward the purchase of a cell phone –  or the wheel could hit them with a roof leak that would cost them $50. Baker added a police officer this year who walked through the fair, and if anyone was caught littering, loitering or running they were issued a ticket. Students were also hit with a $30 overdraft fee by the bank.

This year is Baker’s third year to oversee the fair, which was already being implemented before she came to Lafayette. The fair is considered a dropout prevention program that reinforces the importance of staying in school and getting an education.

“(The fair) is a reminder for how much life costs,” Baker said. “They have a good time. If they do save money I think they are proud of themselves to see that they can do that and then those that end up spending, and not saving, I think they kind of look at it a different way of, ‘Wow, this does affecting me if my grades aren’t good or if I don’t stay in school.’ I think they can look at that and get the point of what we’re trying to teach them.”

At the conclusion of the fair, the student who saved the most was given a prize. Baker said she has had students come up to her after the fair or the following day and tell her they had no idea how much life costs in the real world.