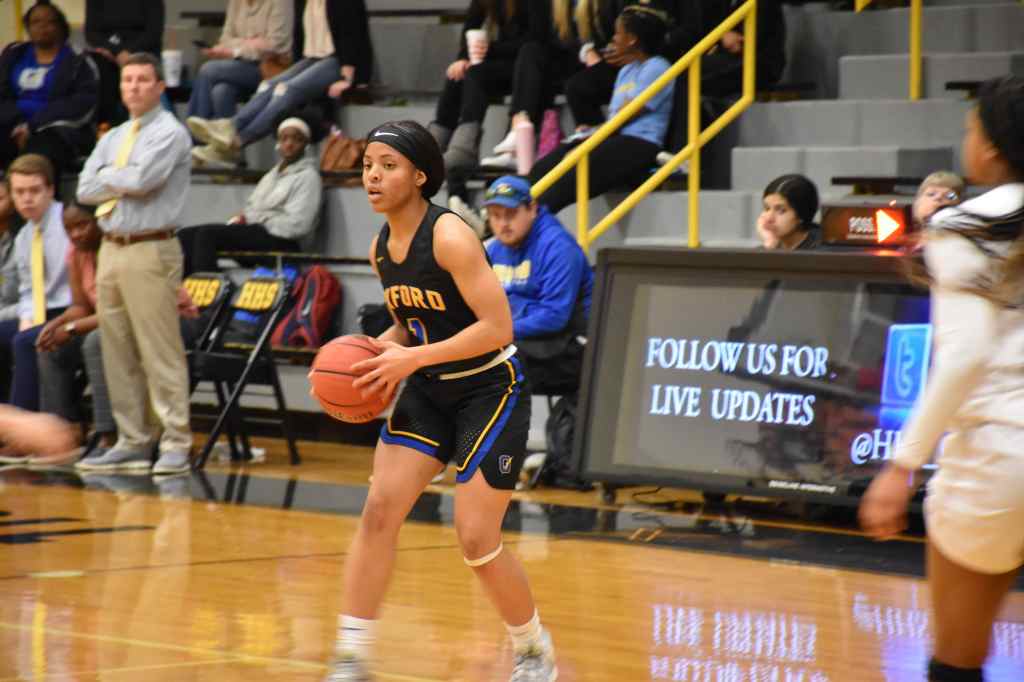 HERNANDO — There will be not one, but two Region 2-6A championships at stake come Friday.

The Oxford High School girls basketball team defeated the Horn Lake Lady Eagles 46-37, giving the Lady Chargers their first-ever Class 6A playoff berth. The win was also their fourth in a row.

“We put together a four-quarter night. In a couple of games this season, we’ve played competitive with some of these teams in division,” OHS girls head coach Cliff Ormon said. “We’ve always had a a let down, but tonight, we just stuck it out, fought through and made some plays.”

Oxford (14-13) was able to dominate the paint, out-rebounding Horn Lake 51-20 and aggressively attack the basket on offense.

“We saw that on film, and saw we didn’t do a good job blocking out in a couple of games with this group,” Ormon said. “This was a game where we had a size advantage. Toles did a great job being a presence in the paint. That is key for us, not letting teams get second chance points.”

After trailing 6-2 and giving up two three pointers early on, Oxford closed the first quarter with a 12-0 run and never losing the lead from that point on. Horn Lake eventually found themselves within a point early in the second half with another pair of quick three-pointers, but a 7-0 run all by Addison Howell gave Oxford another cushion to work with down the stretch.

“We needed a response like that. That’s been one of those things, we’ve had a few letdowns when team makes a run at us,” Ormon said. “That allowed us to space the floor and attack from different areas.”

Howell finished with a season-high 24 points and 15 rebounds. She was one rebound away from a first half double-double.

“[Howell] getting us going and when she brings that effort, she’s capable of doing that a lot… especially when she’s around the basket,” Ormon said.

The Lady Chargers will face Hernando at 7 p.m. on Friday from Hernando for the region championship.

Boys survive in overtime to advance to finals

It took a little longer this time for the Chargers to seize control of Hernando.

The boys (22-7) outlasted the Tigers 76-65 in overtime to play for another region championship and complete the season sweep. The Chargers fell victim to second chance points all throughout the night, but made the clutch buckets down the stretch en route to victory.

“I felt like we kind of went through the motions,” boys head coach Drew Tyler said. “We knew [Hernando] were going to give us their best game and throw everything as us to get to host that championship game. We had a lot of empty trips on offense and weren’t blocking out. Hernando had that rebound edge on us all night long.

“For a senior-laden team, we can’t have that. Our goal was to get us in that championship game. Nobody will be taking about how we got here or the previous game.”

Most of the scoring load was carried by Kylan Blackmon, with 34 points, and J.J. Pegues, who had 17. In overtime, they were able to get a balanced attack and finally do what they failed to do for much of the game.

“I thought we made the most of every possession in overtime and buckled down. I maxed our guys out on minutes, so they were tired,” Tyler said. “We had some late timeout where I could rest them and  at the free throw line… then we had some good defensive trips. The way we played in overtime, we need to see more of that in the full game.”

The Chargers will face the winner of Southaven at for the region crown 8:30 p.m. on Friday.

Ole Miss storms back for dominant blowout of Mississippi…