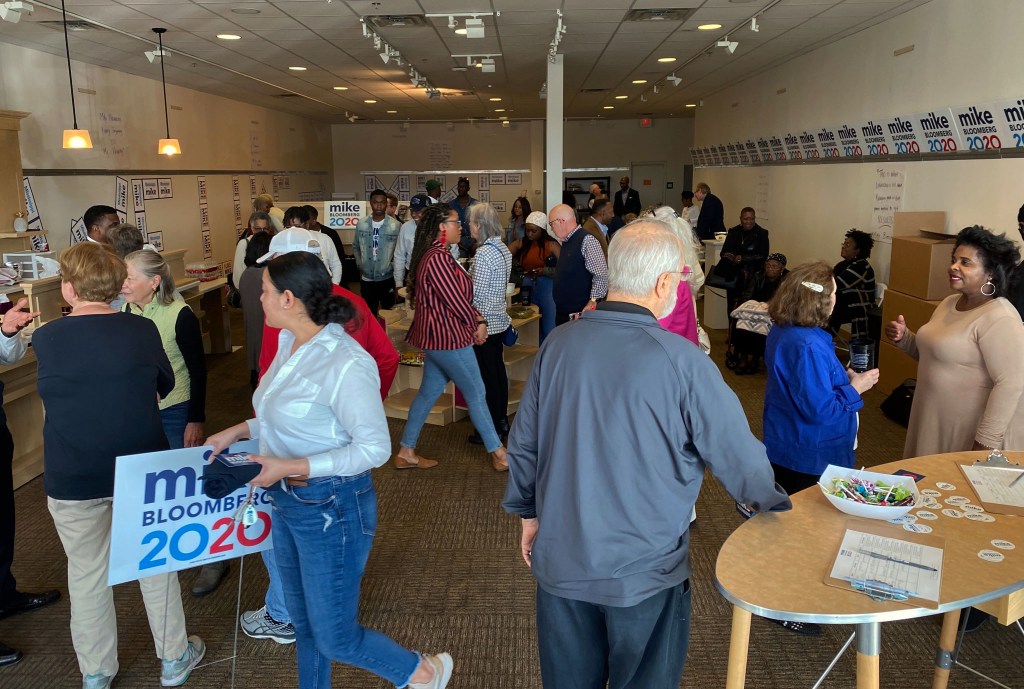 Supporters for Michael Bloomber gather in his Oxford campaign office, which opened this weekend. The Mississippi prirmary is on March 10, 2020. (Mike Bloomberg Campaign)

Many candidates for the Democratic presidential nomination will not spend much time, if any, in Mississippi ahead of the March primary.

The former New York City mayor has chosen to plant his flag firmly in what is strongly considered a flyover state to most national Democratic candidates with the opening of a campaign office in Mississippi.

Senator Bernie Sanders, former Vice President Joe Biden and other Democratic heavy hitter candidates have very little presence in Mississippi with less than a month to go before the March 10 primary. Bloomberg views Mississippi as a place he could have strong success.

“Mike’s been clear he wants to run a different kind of campaign, so he’s investing heavily in states all across the country. Not just Mississippi,” Sam Hall told the EAGLE. “He’s not running a traditional campaign. He’s running where the voters are. It’s not just a token campaign of ‘Let’s put a few organizers in the state or lets put one or two in the state to go around and talk.’ It is a full fledged, well-funded, professional campaign.”

Hall is serving as communications manager for Bloomberg’s Mississippi campaign.

The Oxford campaign headquarters is in the former Hallmark store located in the Oxford Galleria off Jackson Avenue West.

For many candidates who decide to make camp in north Mississippi, Tupelo is normally the choice. The choice of Oxford for Bloomberg was due to several factors, including the geographical location of the city.

“We chose because it’s centrally located for the northern district,” Hall said. “It allows us to touch pretty much every county in the north part of the state within an hour or so of drive time. It’s a perfect, central location for us and allows our canvassers, volunteers and paid staff to have a central home off that they can work out of reach for voters.”

With Mississippi’s primary four weeks away, public polling data and tracking numbers are hard to find, though there are internal numbers the campaign is able to see.

“I will say we are very encouraged by with our internal polling,” Hall said. “The way the presidential primary is about delegates. As you’ve seen in Iowa and New Hampshire, you don’t have to win the entire election to pick up delegates. That means everywhere you can compete a candidate should compete. Because, even those who come in second and third will pick up delegates.”

Mississippi holds an open primary, meaning candidates must meet a threshold of 15 percent at the congressional district or statewide level in order to be considered viable. There are 36 delegates up for grabs in Mississippi and of those pledged delegates, around four to nine are allocated to each of the state’s four congressional districts and another five are allocated to party leaders and elected officials, in addition to eight at-large pledged delegates.

Bonus delegates will be allocated as Mississippi shares a primary date with six other states holding contests the week after Super Tuesday.

According to Cristen Hemmins, chair of the Lafayette County Democrats, there have been no other Democratic candidates express interest to her about setting up an Oxford office.

“Hopefully, once we have a candidate to rally around, we will have an office,” Hemmins told the EAGLE.

Bloomberg’s Mississippi campaign has already begun holding events with one taking place in Southaven on Tuesday. There are events planned for Oxford in the weeks ahead but Hall noted nothing had been finalized yet.