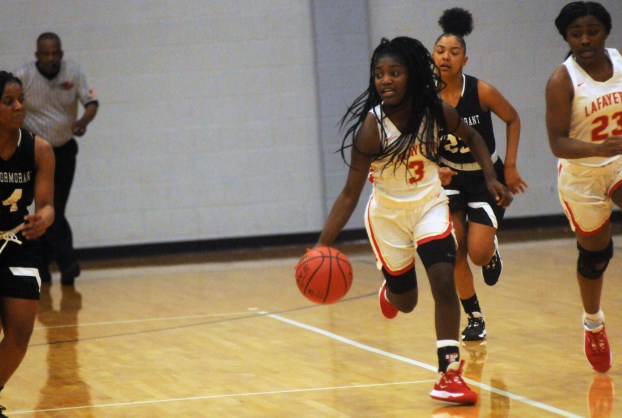 Lafayette’s Molly Jones (3) dribbles up the court during their game against Lake Cormorant in the Region 1-5A tournament at Lafayette High School on Tuesday, February 11, 2020. The Lady Commodores won 54-8 to advance to Friday’s tournament championship game. (Jake Thompson/Oxford Eagle)

Lady Commodores advance to 1-5A title game; Commodores’ season on the brink

The regular season did not end as smoothly as Shayne Linzy would have liked, with his team losing three of their last four games.

On Tuesday, the Lady Commodores got the bad taste out of their mouth and cured some of the ailments they were experiencing with a 54-8 win over Lake Cormorant in the opening round of the Region 1-5A tournament at Lafayette High School.

No. 1 seed Lafayette (19-5) was dominant for the first 16 minutes of the game with a punishing defense that stymied the Lady Gators, who did not score their first points until the three-minute mark of the second quarter.

“I tell the girls playing a team over and over and over again, it’s tough,” Linzy said. “I told them, ‘You want to be the best? Believe that you’re the best right now? Well then you’ve got to play your best. Let’s set the standard, let’s set the bar tonight. Then from this point we don’t go below it for however many games we got left.’ I thought the girls, defensively, did everything they were supposed to and be everywhere they were supposed to be all night.”

After a 22-0 opening quarter, Lafayette continued to clamp down by holding the Lady Gators to four points at halftime.

Lafayette will play Saltillo in the tournament championship on Friday at 7 p.m. The both teams secured a berth into next week’s Class 5A playoffs, but the winner will secure that all-important first round bye.

“Win or lose on Friday, we’re still playing next week,” Linzy said. “But here’s the next step to achieving the goal that we want to achieve and we’re getting ready to play a really good Saltillo team that’s been playing really, really well. On top of that, the last time we played them, they beat us. Now we get to be more of the hunter instead of the hunted.”

Lake Cormorant (5-20) will play Center Hill in the losers’ bracket with a berth into the playoffs at stake, and the loser will see their season end.

Commodores’ season on the line

Despite not knowing how many more games they may have together this season, Lafayette’s boys team is playing solid basketball as the postseason begins.

In order to see how much improvement has been made and to ensure at least one more game next week, they will have to win in Friday’s losers’ bracket game.

Lafayette fell to Center Hill 81-49 in Tuesday’s opening round of the 1-5A tournament. While the end result may not reflect it, the Commodores (3-21) gave the Mustangs a scare in the opening moments of the game.

“We’re competing,” Lafayette head coach Brad Gray said. “We’re playing a lot better together. The score is what it is, but tonight I was proud of the physicality our guys played with and how hard they competed. We’re talking about a team who beat us by 70-somthing points the last time we played them and we were pretty much right there with them much of the first half.”

The Mustangs pulled away as the second quarter progressed and were never threatened by Lafayette in the second half. Despite the outcome, Gray feels his team is peaking at the right time and improved from the season opener on Nov. 5 to Tuesday night.

“I think we’ve definitely gotten better. I don’t there’s any question about that,” Gray said. “Anyone that saw us play earlier in the year compared to now would tell you we’re playing a lot better right now. Especially over the last six or seven games.”

Lafayette will play Saltillo in the losers’ bracket game at 5:30 p.m. on Friday to keep their season alive and clinch a berth into next week’s 5A playoffs. Center Hill will play Lake Cormorant for the tournament championship at 8 p.m.

HERNANDO — There will be not one, but two Region 2-6A championships at stake come Friday. The Oxford High School... read more