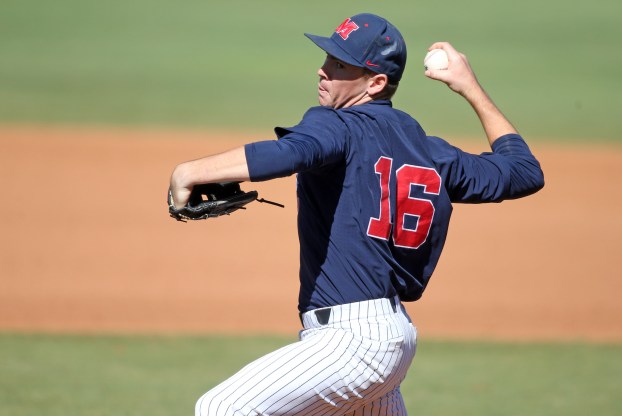 Derek Diamond is in the same position as Gunnar Hoglund was one year ago.

Like Hoglund, Diamond is a true freshman, right-handed pitcher, very highly rated and recruited coming out of high school. Now, Diamond is slated to be the day-one Ole Miss starting pitcher on Sundays, just like Hoglund was one year prior.

“I’ve had questions upon questions for Gunnar,” Diamond said. “He deserves so much credit. He’s so calm and confident and smart, it’s amazing. Doug (Nikhazy) too, they’re very similar dudes. People say pitchers are all the same, maybe starting pitchers are all the same. But we get along really well. Whatever questions I have for them, Gunnar specifically, he’s just so calm and answers them so real. It’s just easy for me to understand what he’s saying.”

However, Diamond did not always intend to be a Rebel. In fact, he was very nearly a Stanford Cardinal.

The No. 13 rated right-handed pitcher, according to Perfect Game, had been committed to Stanford since 2017. Yet, despite a 4.0 GPA in high school, he was denied entrance to the school academically. Blindsided by the decision, one year ago in February he committed to Ole Miss over LSU, Virginia and others.

He admits it’s been an adjustment, both from a baseball perspective and culturally. A Southern California native, he planned on going to school in the same state, just a handful of hours north. Instead, he moved all the way across the nation to Mississippi. Kids are just kids, he said, but admits there’s a lot of things people value and cultural ideals to which he had to adjust. His favorite new food? Pizza. He loves the Lost Pizza and Soulshine chains, he said.

“It’s a huge adjustment. I got the advantage, my summer going into senior year, facing some of the top guys from around the country,” Diamond said. “It’s a lot closer to that than facing the guys I faced in high school. But it’s the same game. I’m doing the same thing on the mound and I have the same mindset. From that standpoint, it hasn’t been too much different.”

Like Hoglund the year prior, Diamond participated in the Perfect Game national showcase, giving him that opportunity to face off with some of. the best in the nation before coming to college. There, he met his catcher Hayden Dunhurst, another member of the Rebels’ No. 2 rated recruiting class.

Dunhurst, of Carriere, Miss., said he was “pumped” when he found out Diamond was going to be coming to Ole Miss. The two have had a lot to get used to with a pitching staff that throws a lot of responsibilities at pitchers and catchers. There’s a whole new slate of signs and signals that they didn’t really have to think about in high school.

Still, Hoglund’s big piece of advice rings above everything else

“I’ve just been reminding him that it’s the same game. Go out there and compete on every pitch and trust your stuff,” Hoglund said. “He’s extremely talented. Low 90s fastball, great off-speed pitches.”

Diamond sort of nervously chuckles as he mentions the Rebels’ first opponent of the season, No. 1 Louisville. How will he keep calm pitching against the nation’s top-rated team in his first ever college start? It’s simple, he says.

“Get guys out. It’s been the same thing forever.”

Oxford has had an MHSAA sanctioned bowling team for just one season, but in that inaugural year, the Charger girls... read more