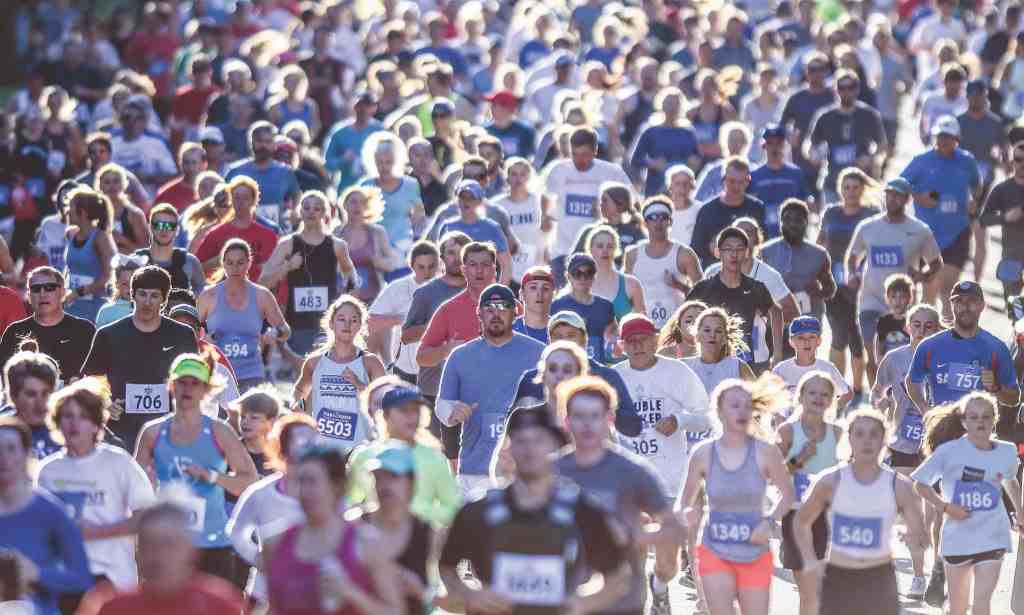 Runners make their way along Price Street in the Double Decker 5K and 10K runs in Oxford, Miss. on Saturday, April 27, 2019. The 2020 race will feature a new route and even more runners. (Bruce Newman, Oxford Eagle)

With safety in mind and the growing number of participants on a year-to-year basis, the annual Double Decker Spring Run decided to make some alterations.

Those changes, which were announced during the Double Decker press conference on Feb. 4, included changes to both the 5K and 10K routes.

“With this being our 25th anniversary we have analyzed how the race has grown through the years,” said Pam Swain, with the Oxford-Lafayette County Chamber of Commerce. “We’ve been through a couple of different courses, but we’ve always tried to stay true to what makes Oxford special. Of course, for out-of-towners and for us locals, the University and the Oxford Square are two of the mainstays that people really enjoy being exposed to on a race route.”

The Double Decker Arts Festival attracts nearly 70,000 people to Oxford and the Downtown Square each year.

Last year, there were 1,730 racers participating in the run, and Swain said she expects the number to swell over 1,800 for this year’s event. However, she said, the ever-growing number of racers going through some of the more prominent intersections around the Square during a time when vendors and other people are setting up for the arts festival and the music on the main stage has created cause for concern.

Conversations were had with race organizers, the Oxford Police Department, Visit Oxford and Start2Finish, which helps manage the event, to discuss any current problems. One of the main concerns raised was the North Lamar Boulevard and Jefferson Avenue intersection by The Graduate hotel, behind the festival’s main stage.

“Basically all 1,700 of those racers were coming through that intersection between 8 a.m. and and as late as 9:15 a.m.,” Swain said. “There was a constant flow of people through a major area that vendors and out-of-towners and people setting up for the Square fair, all of those people were trying to get through there at the same time. So, OPD and our other partners were stopping traffic at that intersection for a very long time.”

Another wrinkle added to the already-existing issues at that intersection is the creation of the new parking garage. The garage will be utilized as event parking for the festival on Saturday of the two-day event, and will open at 8:30 a.m. The only entrance that will be open is the one facing Jefferson Avenue, where a bulk of the racers would be running through at the time of the garage opening.

To counter these issues, the route will now take a northern direction. The race will still begin at the YMCA located on North Lamar Boulevard, next to Track 61, but it will now take runners towards Sisk Avenue and other residential areas of north Oxford before returning back to YMCA where the race will conclude.

The proposed routes were discussed with OPD, who helped create races that they would be able to help manage and provide as much safety to the runners as possible.

“When designing the courses, lots of things go into the thought process… safety, traffic flow, resource requirements, major roadways that we can’t cross, start/finish location, scenery, being able to get the distance for all events, and how that all manages,” said Daniel Shaffer, managing partner and director of operations for Start2Finish. “We know that anywhere we go in Oxford is going to be hilly. We are excited to see how these courses work and impact other parts of the festival.”

The 10K route will take runners the entire length of Sisk Avenue, where they will loop around Oxford High School before returning back towards the Square. Swain also wants to encourage residents who live along the new routes to go outside and support the racers.

The 5K and 10K races will begin at 7:30 a.m. with the kids fun run beginning at 9 a.m. The kids’ race will not alter their route of running down North Lamar Blvd. to the Square and back. The only change will be the closure of both lanes on North Lamar to motorist for the duration of the kids’ run, which is expected to take around 20 minutes, according to Swain.

To register for the Double Decker Spring Run, presented by Baptist Hospitals, and to look at the new course maps visit their website at doubledeckerspringrun.raceroster.com.