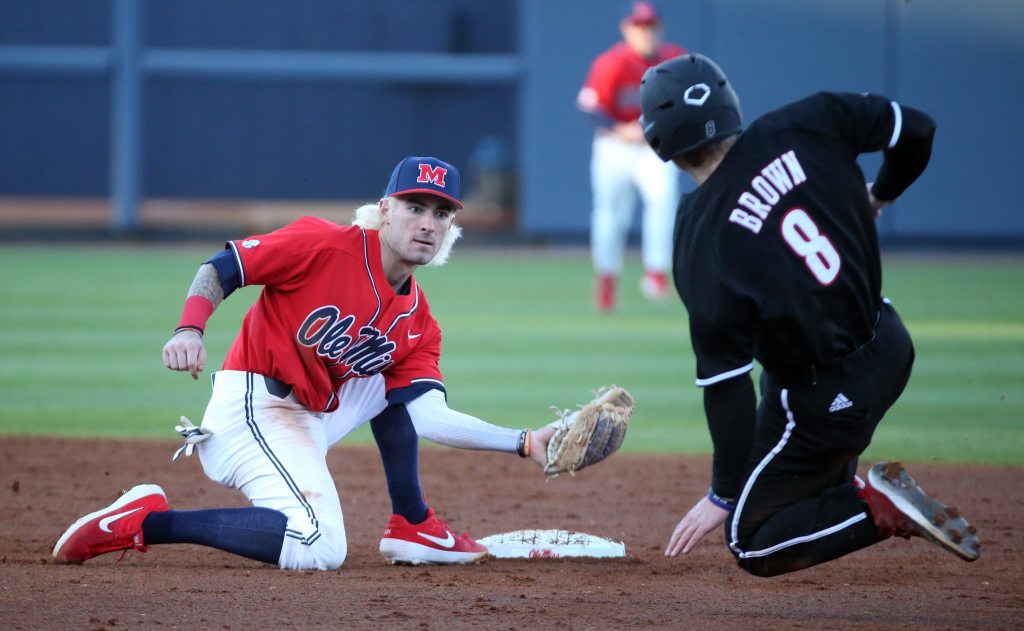 Both starting aces gave up some baserunners in the first inning on Friday night. Both bounced back for masterful middle innings. But it was sixth inning blunders from Doug Nikhazy the Rebels that caused Ole Miss’ demise in their 7-2 defeat to the No. 1 Louisville Cardinals.

Louisville got to Nikhazy early. The freshman lefty struggled with control on his fastball in the first inning, leaving a number of pitches high in the zone. The Cardinals lead off with a single and the second batter walked. Working a large pitch count and walking the bases loaded with two outs, Nikhazy got Cameron Masterman to strike out, ending an early scoring threat for the nation’s top team.

Working behind Nikhazy’s mid-inning gem was critical, as Cardinal lefty Reid Detmers, a reigning first team All-American, got hot himself. At one point, after allowing the first two Rebel batters to reach base, Detmers struck out seven straight Ole Miss batters.

“His fastball, it moves a lot. It doesn’t really seem like it, but he has three pitches that he can throw for strikes,” said Ole Miss junior Anthony Servideo. “You have to be aggressive early. We were all getting fastballs but we failed to do that.”

But as hot as Detmers was, Ole Miss struck first. Servideo delivered a two-out line drive into left center, scoring John Rhys Plumlee from third base for the game’s first run. Plumlee had reached third after pinch running for Ben Van Cleve following a double. Servideo, who doubled to lead off the evening, finished 2 for 3 with a walk and an RBI.

Despite the Rebels striking first, the real damage came in the sixth inning. With the top of the Cardinal lineup due up to start the inning, the Louisville one- and two-hole hitters both singled off Nikhazy to open the inning. Back-to-back doubles from Zach Britton and Henry Davis netted three more Louisville runs before Nikhazy was pulled in favor of senior Taylor Broadway. One more double in the inning, allowed by Broadway with runs credited to Nikhazy, ended the damage at four runs.

“They smelled a little bit of blood in the water and they put together a couple of good at bats,” Nikhazy said. “I left a couple pitches up, maybe not my best pitches. But I’m going to learn from that and I’m going to be better next weekend.”

The Rebels had a chance in the eighth. Justin Bench, with runners at first and second, scored Peyton Chatagnier from second with a blooper single. Tim Elko, the go-ahead run at the plate as the next batter, grounded out to end the inning with Ole Miss still trailing 4-2.

Backed against the wall, Ole Miss committed three fielding errors in the top of the ninth, leading to Louisville tacking on three more insurance runs. Ole Miss didn’t get a batter on base in the ninth. Final score: 7-2.

The most recent time Ole Miss lost a season opener was 2010, a 6-5 defeat to Louisiana Monroe. Next up, Ole Miss and Gunnar Hoglund will get Louisville’s hard-throwing righty Bobby Miller on Saturday afternoon at 1:30 p.m. in game two of the series.