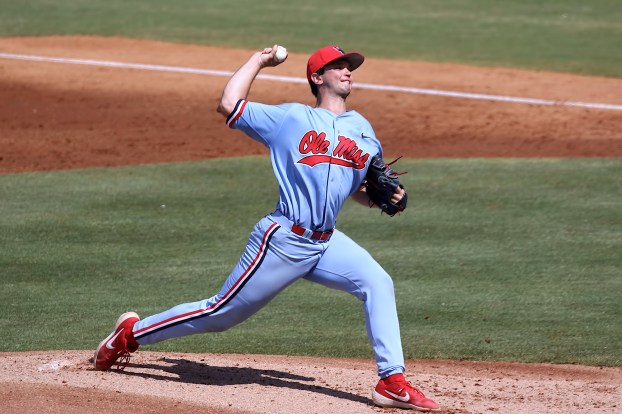 Gunnar Hoglund pitched his longest outing of the year for Ole Miss in their SEC Tournament game against Arkansas. Friday, May 24, 2019 (Michael Wade)

Bases loaded is back! Every Friday (and the rare Thursday), we’ll take a look at four pressing storylines heading into the weekend of Ole Miss baseball. This week, the Rebel season opens with a chilly, but sunny weekend against the nation’s top team – the Louisville Cardinals.

Ole Miss didn’t take scheduling easy on themselves. Looking around the SEC opening weekend slate, teams across the conference are opening their season with teams of the likes of Illinois-Chicago or Wright State or Holy Cross. Alternatively, the Rebels are playing the nation’s No. 1 team.

Here’s four things to keep an eye on as the Cardinals come to town to open the season at Swayze Field:

First Base: How many different Rebels will start in the outfield over opening weekend?

There was only one player head coach Mike Bianco guaranteed will start in the outfield on Friday night. Freshman two-sport athlete Jerrion Ealy will get the start in center field. The Rebels head man has made it clear it’s a position of fluidity among the Ole Miss roster. Yet he did throw out a number of players he expects to get time in the outfield over the course of the opening weekend: six.

Besides Ealy, the other names in the outfield are mostly unknowns to Ole Miss fans. Kevin Graham is one of the options in left field. Justin Bench is one of the options in right field. Otherwise, the list of players who could see outfield time include three true freshmen (Cade Sammons, Peyton Chatagnier and John Rhys Plumlee) and a junior college transfer in Hayden Leatherwood.

Yes, if you add the names up that is seven, not six. So, one of those seven not named Jerrion Ealy will likely get left on the bench for the weekend. Seeing which six play will be interesting.

Second Base: Who wins the starting job at second base?

Where the three outfield spots are up-in-the air between a group of six or seven guys, second base is down to a two-man race. Either sophomore Justin Bench or true freshman Peyton Chatagnier will start Friday night at second base. There’s a good chance both will get at least one start over the course of the three-day weekend.

“It’s kind of been a battle everywhere; that’s just how it goes. But whoever plays there, they’re going to do a great job,” shortstop Anthony Servideo said of the battle at second. “They both play for the guy next to them, not for themselves. That’s why they’re going to be so successful.”

Bench made three starts at second base last year, but missed two months with a broken hand. Chatagnier was recruited as a shortstop, one of the many members of the Rebels’ No. 2 rated recruiting class that may be asked to play from day one, either at second or in the outfield.

Third Base: Gunnar Hoglund has taught himself a slider

A year ago as a freshman, Gunnar Hoglund threw a three-pitch mix between a fastball, changeup and curveball. This offseason, he’s added a slider.

The slider addition hasn’t stopped him from throwing the curve, a pitch that he just started throwing that his senior year of high school. Surprisingly, he says he’s already much more comfortable with the slider than he was at any point last year with the curveball. A sophomore who turned it up late last season, Hoglund is also working to be more confident with his changeup and will be attempting to throw the fastball harder this season.

At Bat: The Rebel lineup vs. an SEC-like Louisville pitching rotation

Opening the season with the nation’s No. 1 team inherently presents challenges. The best team in the country will obviously have players on both sides of the ball, but with Louisville it starts and ends with the rotation. Louisville’s one-two-three punch that will face the Rebels this weekend will look just as good as the Vanderbilt one (featuring Kumar Rocker) or the Georgia one (featuring Emerson Hancock) that Ole Miss will see later in SEC play.

Louisville may well have the best one-two pitching punch in the country. Coming back is junior All-American Reid Detmers, the ACC Pitcher of the Year who sported a 2.78 ERA and 167 strikeouts a year ago. On Saturday is Bobby Miller, a former reliever who went 7-1 with a 3.18 ERA since being moved into a starting role last year. He casually throws a 98-mph fastball. The Louisville Sunday starter, Luke Smith, went 6-1 as a mid-week starter a year ago and is most famous for cussing out Vanderbilt in the 2019 College World Series.

“It’s About the Journey”: Mike Bianco looks back ahead of his 20th season at Ole Miss

In the Southeastern Conference, there’s not a single baseball coach who has been in the business longer than Mike Bianco. ... read more