Lafayette girls win 1-5A championship, secure bye in 5A playoffs 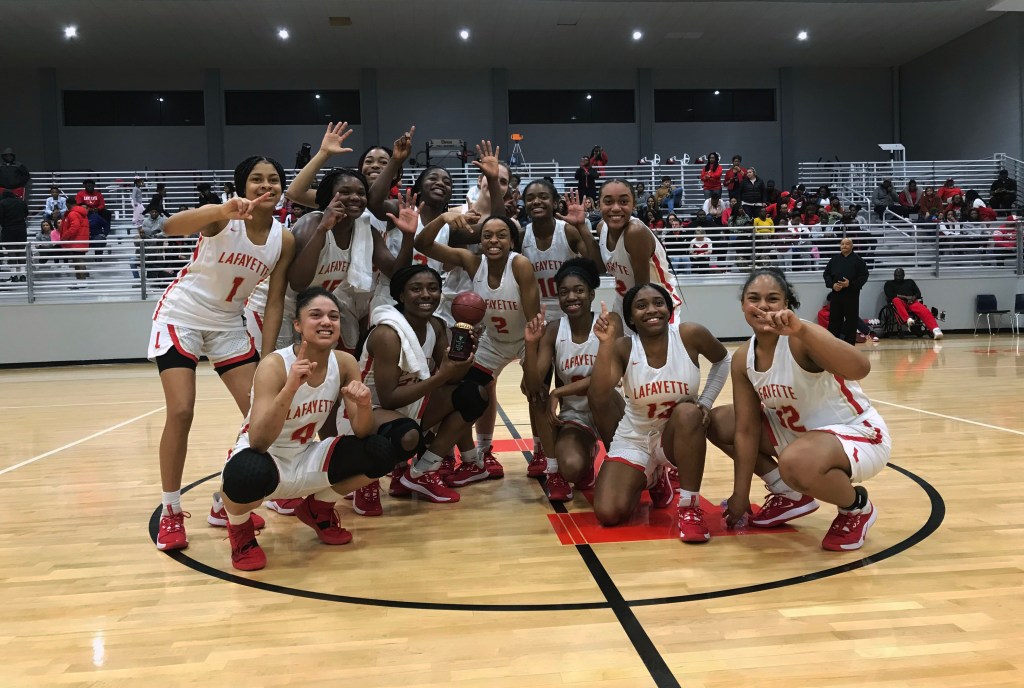 The Lafayette girls basketball team celebrates with their Region 1-5A trophy after defeating Saltillo 69-42 in the tournament champoinship at Lafayette High School on Friday, February 14, 2020. (Jake Thompson/Oxford Eagle)

The Lafayette girls basketball team was close to derailing as the regular season came to a close, but their performance on Friday night put them back on track.

The Lady Commodores handled Saltillo during their 69-42 victory in the Region 1-5A tournament championship game at Lafayette High School. The win secured Lafayette (20-5) the No. 1 seed and a first round bye in next week’s Class 5A playoffs.

When the Lady Commodores and Lady Tigers played during the regular season, splitting their two region contests, the point differential was a combined 15 points. On Friday, Lafayette nearly doubled that point total. The last time the two played resulted in a 45-44 win by Saltillo and something that stuck with the Lady Commodores.

“Everything that we practiced, everything that we talked about, everything that we’ve stressed this year and especially again this week, the girls put it on the floor,” said Lafayette head coach Shayne Linzy. “They played really, really well. … I’ve told all my teams that I’ve coached that it’s hard to beat a team over and over. We won (the first game), they beat us the last time and I think that gave us the edge tonight.”

If Lafayette anticipates a deep run, or even hoisting up another golden ball in early March, they will need their engine to run as soundly as it did on Friday. That engine consists of Azariah Buford, Kimaya Dixon and Molly Jones, who combined for 62 points. Dixon and Jones each scored 24 points, while Buford added 14 points.

Nearly every team knows what Buford and Dixon are capable of when they get going, but Jones is getting hot at the right time of the season and adding another weapon on the court for Linzy. Jones finished 5-of-8 from the three-point line on Friday.

“If they’re able to shut Kimaya down, if they’re able to shut Azariah down then we’ve got to have somebody step up,” Linzy said. “Yeah, it’s going to have to be some scoring but it’s going to have to be taking care of the basketball and playing good defense. We’re still going to score, but we could be really, really good defensively. Tonight, we actually got all three girls shooting the ball well, taking care of the ball.”

By securing a bye, Lafayette will host their second round game on Feb. 21 at 6 p.m. against the winner of Grenada and Callaway’s first round game on Tuesday. The winner will advance to the quarterfinal round at Itawamba Community College on Feb. 29.

The Lafayette boys had a chance to continue their season by at least one more game and their upward wave of momentum.

To do so, the Commodores were going to have to get past Saltillo in the consolation game of the boys’ side of the 1-5A bracket, but they were unable to, with the Tigers getting the 59-34 win. Saltillo clinched the No. 3 Seed in next week’s playoffs, while the Commodores’ season concluded.

“I don’t think we played well tonight. We struggled to make shots,” said Lafayette head coach Brad Gray. “I didn’t think we did a good job executing offensively tonight. We were coming in kind of riding a wave. I would have liked to have seen us compete a little bit better tonight on offense.”

Lafayette (3-22) kept the game close, getting within five points midway through the second quarter but the Tigers used a 19-6 run to close out the first half to grab an 18-point lead at halftime. The Tigers maintained their lead throughout the final two quarters.

“All in all, the last month of the season I was really pleased with how our guys came together and got closer on the court,” Gray said. “Started playing much better together. Pleased with how we ended it.”

The 1-5A All-Region Team was announced during the tournament’s final day, with the Lady Commodores getting four players on the team.

Azariah Buford, Kimaya Dixon, Molly Jones and Karizma Norphlet were named to the All-Region girls team with Buford being named the 1-5A Player of the Year.

Lafayette’s Kylen Vaughn was named to the 1-5A boys All Region Team and J.C. Dennis earned honorable mention honors.