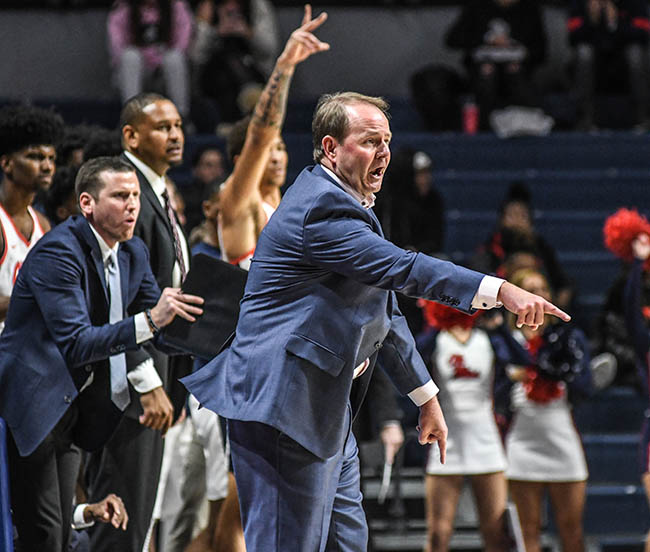 The Rebels are having fun playing basketball again.

After a six-game losing streak, including dropping their first five conference games, Ole Miss has bounced back to win four of their last six in conference play. A team that looked down and out is back in the conversation.

Throughout the struggles, everyone in the locker room downplayed frustrations. The team went nearly three weeks in January without a win. On Friday, head coach Kermit Davis acknowledged that struggle, and the wear it can have on a locker room. However, he also acknowledged how different things are now.

“You’ve probably heard me say this, but I’ll say it again. You can go to college on any campus as a basketball player, meet your future wife and meet some fraternity brothers,” Davis said. “You can and have a great time and get a great degree. But you only have fun as a college basketball player if you win games. It’s as simple as that. And by saying that, these guys are having fun because they’re winning.”

An interesting not through all the frustrations, Ole Miss never stopped practicing hard. Now, having strung together three straight conference wins, the team is practicing just as intense as they were when they had lost five straight in conference play. Davis admitted that’s not something that happens often when a team goes through rough patches.

Coming off of Tuesday’s drubbing of rival Mississippi State, Ole Miss faces their toughest test to date – a road trip to Rupp Arena to play the nation’s No. 12 team, Kentucky.

An absolute afterthought two weeks ago, a win at Kentucky would put Ole Miss firmly on the NCAA Tournament bubble – and that’s not lost to this team whatsoever.

“You have to recognize unbelievable opportunities,” Davis said. “It’s a wonderful opportunity for our team. It’s a quadrant one opportunity on the road against a team that, obviously could win our championship, but could be a final four team and win a national championship. We know how tough it is, but our guys are looking forward to that opportunity.”

Only two members of this Ole Miss team – Breein Tyree and Devontae Shuler – have ever played at Rupp Arena, one of the more storied and loudest buildings in college basketball. Neither of those two have won in the building.

Davis acknowledges the challenges of playing at Kentucky. Each and every one of these players grew up watching college basketball and watching Rupp Arena on television. But for the Rebels, as they take the floor Saturday at 1 p.m., the goal is to only worry about themselves.

Lafayette girls win 1-5A championship, secure bye in 5A…