Long ball, newcomers lead Ole Miss as they tie series with No. 1 Louisville 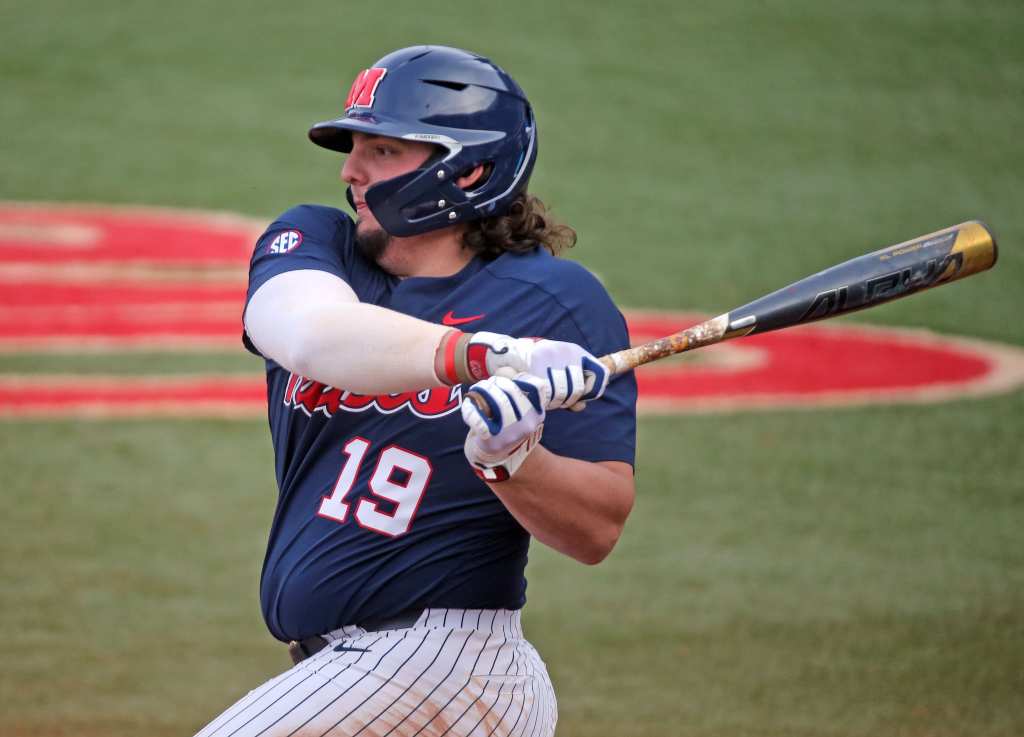 Head man Mike Bianco is quick to emphasize the returning talent on in the Rebel lineup. But on Saturday, playing the nation’s top team, it was a handful of the large grouping of the new names on the roster that swung the tide in the Ole Miss 8-6 win over No. 1 Louisville. The series is now even at one game a piece.

“Yesterday, you could tell we played like it was the first opening game,” said freshman Peyton Chatagnier. “We played scared. We played not like us. Today, we came out and showed them what we have.”

Facing one of the hardest throwing starting pitchers in college baseball, Louisville’s Bobby Miller, Ole Miss jumped quick. Four of the first five in the Rebel lineup got on base against Miller.

Freshman Peyton Chatagnier drove in the first run of the game, a double scoring Anthony Servideo. Later in the inning, it was another one of those fresh faces, junior college transfer Cael Baker going deep for the third run of the inning. It wasn’t the last Ole Miss would hear from Baker on the afternoon.

“We knew with Bobby Miller, a high-velocity guy, it’s just take the fastball away,” Baker said. “Ultimately, it’s just get up there and hunt the fastball. If you see it, give it a good swing.”

Cael Baker is aware of your Kenny Powers memes pic.twitter.com/QKXSKTejVs

Rebel sophomore pitcher Gunnar Hoglund was up-and-down in his first start of the year. Making it 5.1 innings, Hoglund allowed one run in each of the second, fourth and fifth inning, striking out seven runners and allowing six hits. Offensively, the Cardinals were consistent. From the fourth to the seventh, Louisville scored exactly one run in every inning. Two were credited to Hoglund and one each to Benji Gilbert and Greer Holston.

“Gunnar was good. It’s a good offense (with Louisville),” Bianco said. “He really located his fastball today. The slider was okay. But the fastball was really dominant on both sides of the plate.

While the majority of the Rebel runs came early, they had their own counterpunches to the Louisville offense. In the fifth, Baker scored Chatagnier who led off the inning with a single, and in the sixth Tim Elko went deep with a leadoff home run. At the middle of the seventh, the game was all tied up at 5-5.

Guess what? Cael Baker wasn’t done. With Tyler Keenan sitting on first base, Baker went deep yet again. The two-run shot, Baker’s second of the day, gave Ole Miss a two-run cushion. The Rebels tagged one more in the seventh on a fielder’s choice to take a 8-5 lead into the eighth inning.

“(Baker) had a tough fall. I’m just proud,” Bianco said. “He’s fun. He loves the game and he’s starting to feel a little more comfortable, obviously, up there.”

Austin Miller, who replaced Holston in the seventh, finished the game, initially settling down a Louisville offense that had picked up some sort of a rhythm. Louisville made it interesting in the ninth, a solo shot, a double and a walk on back-to-back-to back at bats brought the winning run to the plate. Sophomore Braden Forsyth replaced Miller for the game’s final two outs, striking out potential winning-run at the plate Ben Bianco to win the game. Final score: 8-6.

In the end, Baker ended the day 4 for 4 with four RBIs and two home runs. Chatagnier finished 2 for 5 with an RBI and two runs scored; he’s 3 for 8 in his first two games as a Rebel.

With the series now tied, Ole Miss turns to a true freshman in Derek Diamond tomorrow for a chance to win a series against No. 1 Louisville to open the year. Sunday’s game starts at noon.